I'm back, folks!!
I apologize again, for the long delay between Postings.. But Life has become increasingly busy for me. The month of April saw me get married to the lovely Suzanne Dargie. Plus,-- my amazing 80 year-old Dad took a whole bunch of us to Holland with him, for an incredible 12-day vacation..
While in Amsterdam, I was able to visit the 'Lambiek' and 'GoJoker' bookstores.. And hunt down some albums featuring one of my favorite European artists: Benito Jacovitti!

This guy's work is astounding to me.. And even more astonishing that his work hasn't been reprinted for North American readers! I only have his work in foreign languages.. Mostly in Dutch, which I have a working comprehension of..
I only discovered his work in 1974, when my family first visited the Netherlands. Jacovitti's stories appeared regularly in the popular Dutch anthology: 'PEP Magazine'.. That publication featured many of his popular characters.
'Jack Mandolino' was a lot of fun.. Mandolino is a small-time crook that can't seem to get a break.. Despite the best efforts of his small Devil sidekick, who's constantly offering advice from his big book of "Dirty Tricks".. 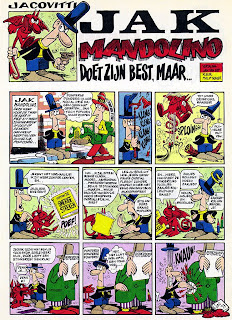 'Cocco Bill' may have been his most popular character.. Jacovitti did quite a few stories with him. And from what I can gather, was propably his most-recognizable character. I have yet to see a 'Cocco Bill' story that lays out why exactly it's so necessary to always have a Set Square on his saddle. But it definitely fits into the absurdist worlds Jacovitti creates! 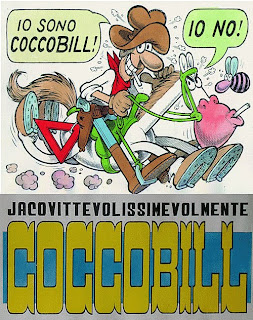 I already had a number of the 'Cocco Bill' books gifted to me by a good CFA-APA friend: Deiderik Van Rappard.. So instead, I bought a volume featuring 'The Zorry Kid'; Jacovitti's spoof on the famed ZORRO character..
I'm always at a loss, trying to describe Jacovitti's work to my friends.. Much of it, strikes me as reminiscent of Don Martin's MAD stuff. Especially the staging and the animated movements. Do I also detect a bit of Prohias' SPY vs. SPY here, too? Not sure. Some of the more grotesque surrealism, has something of a Basil Wolverton feel to it..
Either way, I really enjoy all of it! 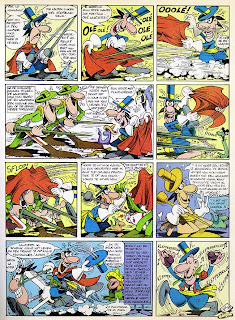 Apparently, Jacovitti completed a very popular adaptation of 'Pinocchio'.. But alas, I haven't been able to locate that one. Instead, I lucked-into snagging another Jacovitti rarity: his 1983 'KAMA SUTRA' book!
Basic Blog decorum prevents me from sharing any of the bawdy/ribald pages from the interior of this remarkable volume.. But I can show you what the cover looks like: 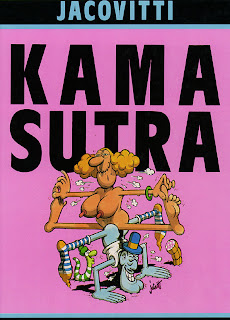 Benito Jacovitti passed away at the age of 73, in December 1997. He created more than 60 different characters; and produced artwork & stories for more than 150 different books. He was easily one of the most prolific & original artists in comic-book history..
Why should it require taking a trip to Europe to get my hands on some of this stuff?!

Congrats on the wedding , happy for you guys.

Serendipity... I just looked up an Italian Jaccovitti site, where they have all 20 issues of the Jaccovitti fanclub magazine wih all sorts of goodies and decided to get those and share them with people on my own blog (allthingsger.blogspot.com). Then I came here, looking for foreign cartoonists who might be available for work...

By the way, I got to the Jaccovitti site through Luc Cromheece's Plunk blog. Do you know that? Talk about great strips not known in the American Continent...!