Has it really been more than a month between Blog posts?! For SHAME!!!

Sorry, Folks.. but as mentioned in the prior posts, I've been insanely busy with freelance work lately. And on top of that, me & Suzanne have been bogged down with the details of purchasing our very own home.. So there's been literally waves of bureaucratic/legal paperwork for me (us) to wade thru.. Posing another significant distraction, from regular bloggin'-time!

Normally at this time of year (like most everyone else?),.. I'm caught up in the hectic buzz of the 'Holiday Season' hullaballoo.. Shopping for small gifts, finding a nice Christmas Tree, etc.. But also working hard on finishing the artwork for yet-another Dannys family Christmas Card.. An annual tradition, that I began back in 1989..
They've proven to be very popular with friends & family, over the years.. But I've been forced to concede that I simply won't have the time, to complete one this year.. Of course I'm bummed about it, as it'll be the first time I've missed a year.
With luck, I'll find a way to squeeze in work on another new Card, before the 2008 deadline looms up & bites me on the bum.. But in the meantime, I thought I'd share a few of my "older" examples..
Some of the talented artists in my "Friends" links will recognize these. But hopefully, will appear "new" to the rest of you.. 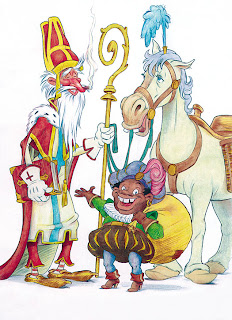 This "Sinterklaas" one, is from 2003.. I was going for a kind of Ferdinand Horvath treatment, I think? The white steed looks a bit bland.. But I was quite happy with the way that 'Sinterklaas' and 'Zwarte Piet' turned out! I'm 1st-gen Canadian, myself. But I come from a double-Dutch genetic background.. Both of my parents emigrating to Canada from Holland, in the early 1950's.. So, I think they got a kick out of this one. Even though Dutch folks really celebrate their Christmas on December 5th, rather than the 25th..

'Sinterklaas' ended up looking a little bit shady & unorthodox, which is what I wanted.. A man that enjoys a good cigar, and possibly the occasional alcholic beverage, as well? heh His costume details worked out, too.. A mix, from a number of referenced examples..
'Black Peter' should probably look a bit more serious, too. I think he was supposed to cart away naughty children in bags, in the original Dutch legend.. But he looked so hysterical in those ballooned Spanish pants I gave him.. That I couldn't resist making him much more cherubic & ebullient! haha He seems so elated, to help out ole St. Nick! 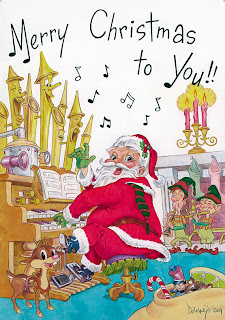 The Jolly Elf at the pipe organ here, is my Card from 2004.. And, another favorite of mine! I guess because I used a very traditional 'Santa Claus' design.. the drawing came together very quickly & easily.. I was lucky enough to get some nice animated movement within the main Pose.. I wanted him to look like he could teeter over completely, at any given moment?.. Having half his Right Ass Cheek hangin' off the edge of that tiny wheeled stool, certainly helped in that regard! hehe

The musical Elves in the background, were a last-minute addition, to help balance-out the composition, a bit better.. Their contrasting poses seemed a good fit, with each other. It's a shame that the L'il Reindeer's silhouette gets a bit buried in the color scheme I used for the pipe organ, though.. When it came time to design the organ pedals, I went for a gas/brake scheme.. hah!
Was I subconsciously going for a 'Rankin-Bass' or 'PuppetToons' vibe, with this one? Not sure, myself.. 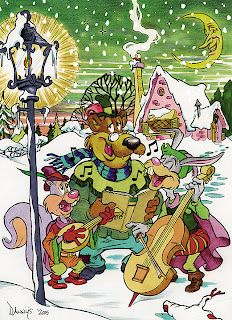 Okay, this 'Three Minstrels' example, was from 2005.. And is very obviously the result of poring over far too many of the 40's-era Frazetta "Funny Animal"comic-books I've been consistently purchasing on eBay!
My versions tend to look a little less spontaneous than Frank's.. But I hope they haven't come off as completely stiff or dull, either? I was pretty happy with the poses & composition, actually. And I'm fine with the cottage and BG details, too.. But for whatever reason, I had a helluva time pushing the Printer to recreate the colors found in my original Digital File.. An ongoing frustration that I've had with all of the Cards I've done over the years.. But particularly so, with this one!

Anyways, that's all for now, Folks.. I'll be trying my darndest to not let another complete month roll by, before I get another "new" Post, up again.. 'Til then, keep yer fingers crossed & say a l'il prayer for me! 'Til then, see yuz..
Posted by Rich Dannys at 1:13 AM 7 comments: