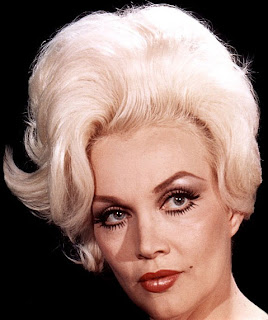 Who the HELL is Liz Renay?.. And why would you care, Rich?!

Fair question. But close friends already know that I have a perverse preoccupation with the subject of 50's-era Burlesque/Striptease.. And though most of today's obits have highlighted Ms. Renay's erratic movie-acting career.. She began her ShowBiz career in the late 40's, as an Exotic Dancer named: Liz O'Leyar! 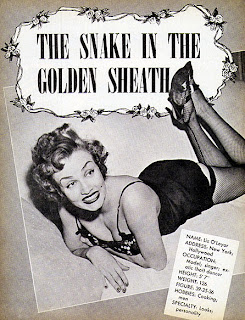 "Liz O'Leyar" was her stage name. But she was born Pearl Elizabeth Dobbins on April 14, 1926; in Chandler, Arizona. By all accounts, she was a Star Performer throughout most of the 1950's.. Appearing onstage, mainly in the NYC nightclubs along "Strip Alley", on notorious 52nd Street. Though she acted in many cult B-movies thru the 60's.. She would return to Striptease again in the mid-70's, headlining at many L.A. & Hollywood nightclubs & theatres.. Even performing (for a time) with her own daughter: Brenda! 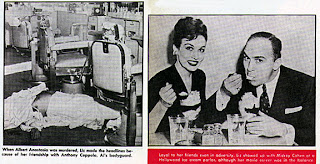 By the sound of it, she led a pretty full & interesting life..
She was something of a serial nymphomaniac.. She married 7 times (Just like her Grandma!).. And wrote 3 books, one of which was entitled: 'My First 2,000 Men'.. A tell-all catalogue of her many sexual conquests?

Early on, she must've had a thing for "GoodFellas", too!
In 1958, the N.Y. State district attorney hauled Liz into court, for questioning.. Albert Anastasia, the leader of the 'Murder Incorporated' crime gang, was ruthlessly gunned down in a NYC barbershop.. By unfortunate coincidence, Ms. Renay just happened to be dating Anastasia's main bodyguard at the time: Anthony "Cappy" Coppola.

Throughout, she had also secretly been dating L.A.'s reputed mob kingpin: Mickey Cohen. Reportedly, she had been laundering some of Cohen's crime money, in NYC. By the early 60's, she'd been caught lying about these details under oath. Was convicted of Perjury. And served 27 months of a 3-Year term, at the 'Terminal Island' Federal Prison for women..

HORROR From The CRYPT Of FEAR! 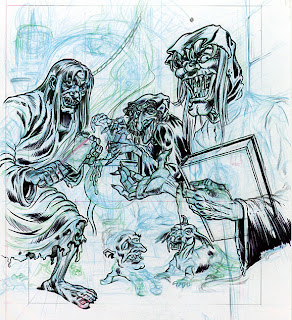 My good friend & fellow 'Original Art' collector: Bill Leach, is the Editor of his very own EC Comics 'zine.. It's entitled "HORROR From The CRYPT Of FEAR". And it's a neat little self-published book, that (I think) is still available from 'Bud Plant Books'..
I did a couple of illustrations for him, in the past.. And this was a half-finished Ink Sketch, I'd intended to contribute to his most-recent issue.. Unfortunately, I (again) missed his production deadline!
I liked the way the Sketch turned out, though.. And will probably revisit it & fix all the problems I now see in it.. Though I'm happy with the "GhouLunatics" figures.. The overall layout/composition is still looking a bit too crowded, for my tastes.
The 'zine features terrific articles about EC Comics history. And even showcases rare "unpublished" artwork, by those EC artists that're still around.. Unfortunately, with George Evans' recent passing.. that number seems to be in rapid decline.
Posted by Rich Dannys at 2:02 AM 3 comments: 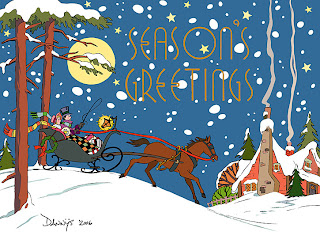 Here is the 2006 version of my annual family Holiday Card..
The Design was inspired by a number of old-timey 'Art Deco' Christmas Cards that I'd purchased off of eBay, about a year ago..
I tried to create a more elegant -looking Image, this time 'round. I'm not sure it was entirely successful. But I've sometimes had family & relatives take issue with the more "cartoony" ones, I've done in the past. It's hard to please everybody.. Which is why this is always one of my most stressful assignments, each year!

I hope everyone had a terrific Holiday Season.. And Best Wishes to all of you, for 2007!
Posted by Rich Dannys at 2:00 PM 3 comments: