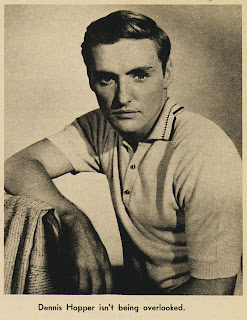 I heard this afternoon that the actor Dennis Hopper passed away..
I don't mean to use this Blog to consistently memorialize famous people. And I doubt I'll be spending more time using this forum, to talk about Hollywood personalities.. But Dennis Hopper was very likely my own favorite, as far as actors go. So please forgive me this once, if I venture off into the "Dead Actors" category..

I can't remember the first time I saw Dennis Hopper on screen. But it was probably in some stupid Western, or something. Like most people, he didn't really make a deep impression on me.. Not 'til maybe 'Easy Rider' or David Lynch's 'Blue Velvet'. A film that made great use of his explosive intensity.. Later on, I would go back in Hopper's filmography to marvel at Curtis Harrington's amazing 'Night Tide' (1961).
Hopper always struck me as the "King Of Cool", too.. He was always a compelling interview, on the Late Night shows. Always had an interesting anecdote about someone he'd met in the past, or an experience that he'd survived to tell the rest of us about. It's amazing to me (and I'm sure others) that he even survived to the age of 74?!
I know he was mentored into Art Collecting by Vincent Price. That he hung out with James Dean, in 50's-era Hollywood. Had been married & divorced, many times over. And that he'd nearly been locked up for good into a mental institution, when his addictions became uncontrollable..

Many years ago, I toyed with the idea of using the image of Dennis Hopper (and some of his contemporaries) in a 50's-style Juvenile Delinquency comic-book story. I got about as far as working up a couple model sheets, before burning out on it.. It was to be called: "The Prophets Of Price Street"! hah With Dennis (of course) as the gang-leader; featuring a look that bore a striking similarity to his small role in 'Rebel Without A Cause'..

Here's a turnaround of his Head:

One of the most admirable things about Dennis Hopper, was his drive to produce & create. From interviews I've read with him, he was always greatly concerned with leaving behind a 'body of work'.. And to that end, he struck me as very successful!
'Blue Velvet' was critical to giving Hopper a second-chance in Hollywood. And he made the best of it.. Parlaying his popularity, into a short (but memorable) career as a film director. 'Colors' and 'The Hot Spot' come immediately to mind..
And rather than take the obvious parts in bigger-budget films,-- he also made some brave choices as an actor.. I'm thinking of his more obscure films like: 'Chattahoochee' and 'Paris Trout'?

When I saw the video of Hopper getting his star on the 'Hollywood Walk Of Fame', a few weeks back.. I knew he would not be around for very much longer. Even so, the thought that I won't see him in anymore films, makes me more than a little sad.
IMHO, he will definitely be missed!
Posted by Rich Dannys at 5:15 PM

That centre drawing is BANG on! Awesome! Oh the things I still don't know about you Habibi!
I'm very sorry to hear that he lost his battle to cancer. I know you were very fond of him as an actor and a personality.

Yeah , too bad about Hopper , loved his work.

It's little known that he was an accomplished photographer too.

When I heard that Dennis Hopper died, I immediately thought of you. I'm sorry to hear that he past away. Too bad the divorce didn't finalize first.