As I get older, I'm finding it increasingly difficult to find stuff at my comic-book shop (The Beguiling) to get genuinely excited about.. Maybe it's because my tastes run a bit too "Old School" for today's product? I'm not really sure. But there are very few working artists today, that really whet my appetite..

One of the few that DO garner my attention, is: Darwyn Cooke!
Some of you may be more familiar with Darwyn as an Animation artist, working alongside Bruce Timm etc. over at Warner Bros? Or, perhaps the 'Men In Black' cartoons, he directed while at SONY Animation?
Well, what really impressed me,-- was that at the height of a very secure Animation career -- he simply walked away from it all. And pursued his first real love: Comic-books!
How ballsy is that?!

Darwyn has already set the World on fire with his terrific 'NEW FRONTIER' project, amongst others.. And again,-- instead of playing it safe & sticking with DC Comics.. What does he do? He decides to blaze his own path, developing more-personal projects with IDW Publishing & the like.
Now, that's bravura folks! 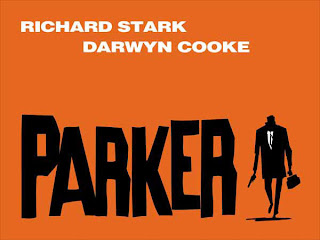 Darwyn's latest and (in my humble opinion) soon-to-be greatest project, is: 'The HUNTER'.. The first of 4 adaptations of Donald E. Westlake's (written under the pseudonym: Richard Stark) "PARKER" novels.. Gripping, gritty crime-dramas that have all of the 'Film Noir' touches that make the material a glove-fit for Cooke's raw talent..
Beginning in the early 60's,-- Westlake wrote roughly 30 of these "PARKER" novels. 'The HUNTER' is the first of these.. Here's another tasty Cooke morsel from this adaptation, that has been posted online: 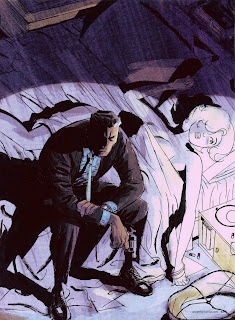 Unfortunately, Cooke has no real online presence. He has a 'Yahoo Group' which is pretty much dead. Recently however, a fellow named: Calum Johnston.. has managed a blog that is (literally) "Almost Darwyn Cooke's Blog"..
He also runs a comic-book shop called: 'Strange Adventures' in Halifax, where Darwyn Cooke now lives.. Anyways, he's recently been running a Contest to giveaway "freebie" copies of 'The HUNTER' to the Top Five "PARKER" images that artists submit to him. So, I thought I'd take a crack at it, too!
Here's my Entry: 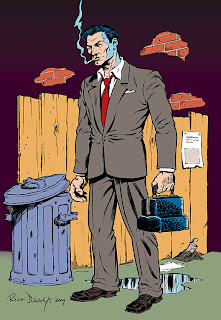 I'd read a great interview with Darwyn at Tom Spurgeon's blog.. Wherein he stated that Westlake had initially imagined actor Jack Palance as the visual model for his "PARKER" character? I liked the idea of trying to draw a young Palance in the role.. I don't think I completely nailed the likeness. But hopefully it'll suitably impress some of the judges, at Contest's end! hah