Season's Greetings, everyone!
Many of you will have wondered if I'd gone permanently MIA?.. It's been literally months since I've posted anything on this Blog. And for that, I do apologize. That said, I do have a few excuses for my absence..
I've had vision problems in my Right Eye. And drawing/inking was becoming increasingly difficult to manage, which certainly put a damper on my creativity/productivity. A couple months ago, I found out from my Eye Doc that I'd developed a cataract in my Right Eye. So, I'll be having implant surgery on January 3rd!
When I had a pre-surgery appointment with the surgeon, they also discovered a small hole in the retina of my Left Eye. That was solved relatively easily, with some uncomfortable Laser surgery. But I also needed to have a complete physical done by my G.P. prior to the upcoming surgery.. And of course, he had to find that I had "elevated" blood pressure. Mild hypertension, I think they call it?..
So, now I got pills for that. But it seemed that if I wasn't sitting in a medical waiting room, I was driving to different appointment.. Exhausting & frustrating! Getting my Right Eye fixed will make me a very happy camper, come mid-January!!

I had a couple small freelance jobs to get to, before I could start my own card. But now, I'm happy to present to you the 2011 version of my annual Holiday Card.. 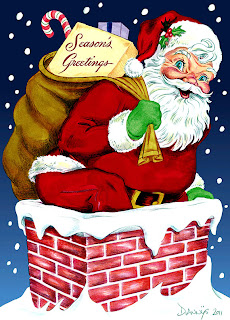 As you can see, I went with a very "traditional" approach this year; based on some of the vintage cards that I'd seen on eBay over the years..  I was in a real hurry, so I wanted a very simple and uncomplicated layout to work with.
I really like those 50's-era Santa designs from years gone by. In fact, I used some of the same reference material from the Holiday Card that I did back in 2004.. He's got the same wide bug-eyes, but the overall proportions are a little more realistic, this time 'round.
The coloring is mostly traditional.. Marker base coat, with pencil crayons on top. And then some digital "tweaking" and a Background, added inside Photoshop..

The printers at Kinko's did a bang-up job for me, and I had my Cards done in the early hours of December 22nd.  Obviously, a few recipients won't be getting them before this weekend. But at least they'll be postmarked prior to Christmas. I try..
For my Internet friends, I hope that this "digital" -version of the Card will suffice.. Y'know, I loves alla youse!

Anyways, this is one of my favorite times of year: getting together with friends & family.. Best Wishes to everyone at Christmastime!.. And here's hoping you'll all experience a fantastic 2012!!
Posted by Rich Dannys at 7:09 PM 6 comments: