I see on my calendar that it was 3 years ago today, that (Bryan) Rodney Dunn passed on from this Earthly plane.. He was definitely a one-of-a-kind character, a genius artist & quite a good friend of mine. An odd guy in many ways, to be sure. But that's not uncommon amongst schizophrenics, I'm told.
He suffered from bouts of depression & paranoia, towards the end. And despite heavy medication,-- I think it's why he ultimately chose to take his own life? It still saddens me.
To read more about him & view examples of his artwork, you can follow THIS link!

Every once in a while, I'll be digging thru an envelope filled with old artwork of mine.. And I'll be reminded how Rod had reacted to it, and/or what he'd said. Sometimes he absolutely LOVED it.. At other times, he had no shortage of advice on how it could've been improved. Oh well,-- I guess I probably offered the same service to him, come to think of it..

The other day, I found this old photocopy that Rod gave me.. To my knowledge, it was our sole collaboration together! 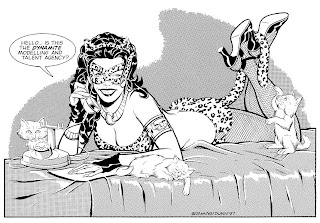 This "CatGirl" illo was something I'd done for Lisa Petrucci.. A West Coast artist, that managed a vintage collectibles catalog, called: 'The Pussycat Catalog'. It specialized (then) in back-issue Men's magazines & weird 50's/60's videos, etc.
I'd worked out a trade for some stuff with her.. In exchange, I agreed to create for her some artwork, that she could use inside her catalog.. Dave Stevens had worked out a similar arrangement with Mike Vraney & his "Something Weird" catalog. And if memory serves, Lisa Petrucci was married to Vraney? I'm not sure..

Anyways, as is usual with me.. Despite getting a good jump on the pencils, I unduly procrastinated on the inks.. When I mentioned to Rod that I was hoping to eventually re-use the illo in a Sketchbook I planned to publish.. He immediately offered to do the inks, himself. And within a week, it was complete!
I think I disappointed him a bit, with my cool reaction. Though I admired parts of it, it just wasn't what I'd had in mind. So I eventually finished my OWN inking on it.

In retrospect, I thought it'd be fun to post Rod's version here.. As a way of commemorating him, I guess? Hope you likey...
Posted by Rich Dannys at 4:17 PM 5 comments: