I've been quite absent, haven't I? Humble apologies, ..again! I'll conveniently blame the Holiday Season hullaballoo, for my inactivity here.
In lieu of a personal Art posting, I'm going to share some of the fine Frazetta trinkets that arrived in my morning mail.. A bunch of color photocopies of some of his Frank's gorgeous comic-book/illustration work, which were shot/scanned directly from the 'Original Art'! 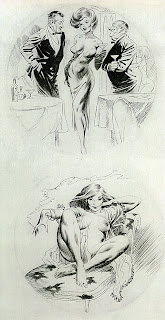 Presented here, are 4 of the 12 illustrations that Frazetta created for the men's magazine, entitled 'GENT'; as published in their August 1966 issue.. Ain't they purty?! The female figures were intended to represent each of the 12 months in a Zodiac Calendar.. 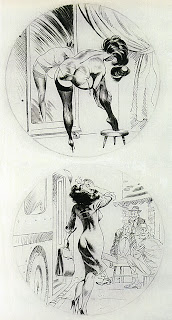 Unfortunately, none of the plates seem to be labelled.. So I'll allow you to make your own best "guess", as to which beautiful lady pertains to whichever specific Astrological Sign? Some of these have been reprinted in a number of different venues, over the years.. But these copies are the most detailled, that I've yet seen..

And even more surprising, is.. After checking these images against the ones in my Frazetta files, I discovered that the Brunette undressing in front of the mirror does NOT match the version printed in 'GENT' magazine. A similar (but different) pose was used. And the woman appears as a Blonde, rather than a Brunette.

Hope you'll find them all as enjoyable to look at, as I do!
Posted by Rich Dannys at 7:02 PM 5 comments: