What I Did Last Summer..

Well, seeing as the "Will & Dewitt" cartoon is now airing episodes regularly on both YTV (Canada) & Kid's WB (United States).. I thought it'd be safe for me to post some of the BG Design work that I'd done for them? 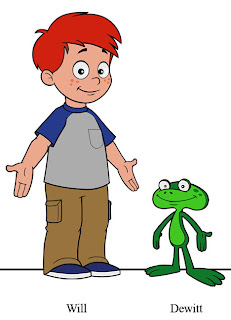 After a particularly distasteful experience, working at 'CORE Digital' on their "Iggy Arbuckle" series.. I started looking for new work at some of the other local Toronto animation studios.. Sending out a few Resumé/Portfolio samplers, here and there. As I happened to be in the area,-- I dropped one off personally, at 'Two Presidents Productions'..
I did not know Michael Carter, previously.. But was somewhat acquainted with Alan Kennedy, the other co-owner.. I knew Alan a bit, back when he ran his previous studio: "Canuck Creations"; which was located inside the 'A Space', at the corner of Spadina/Richmond.
Thankfully, he remembered me too.. And promised he'd keep me in mind, should any new Layout or Design work arise.. And in mid-July of last year, asked if I could do some BG Design work on their new "Will & Dewitt" cartoon, for 3-4 weeks.. 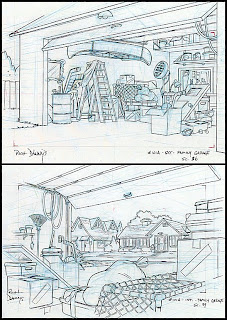 Well, fortunately for me.. 3-4 weeks quickly turned into a much longer 6-month stint!
And I'm happy to say that it was a very satisfying show to work on.. Not only did they allow me to work remotely, from home. And upload the finished artwork to their FTP and CAS (Client Approval System) sites.. But they allowed me to work traditionally (pencil-on-paper), too.
To my knowledge, all of the other artists were working digitally, and in-house..

The show is a very simple Flash cartoon, aimed at a preschool audience.. They're half-show episodes (2 x 11 minutes/half-hour). Featuring a boy named "Will". And his magical morphing Frog friend (named "Dewitt"); who acts as a kind of conscience/advisor/life coach, to young William..
It was directed by Paul Riley. With the Design Supervision, ably handled by Andrew Hickson..
My good buddy Dave Pietila, served as my main 'contact' during the production.. He engineered & managed the Layout/Paint/Setup system.. And kept me busy with Shot Lists to work on, for each episode.. 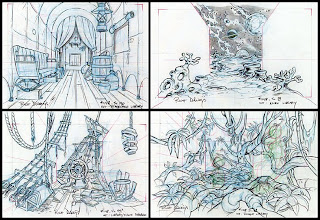 For the most part, my role was to "fill rooms with stuff.." for the Layout crew. Who would take my drawings.. Vectorize & tweak them.. And send them over to the Painters. My layout drawings here, all feature hard pencil "holding" lines.. But if you've seen the show, then you already know that the "look" of the BG's is much softer, with a color-to-color finish on them.. Which makes the character poses stand out, a lot stronger.
The 4 layouts (above), were for an episode that took place in a Library.. As "Dewitt" morphs into a Cowboy, Spaceman, Pirate, and Dinosaur.. The bookshelves on the BG also transform into the appropriate Settings, around him.. All of these, needed to be designed upon the same Template, re: shelf positions.. 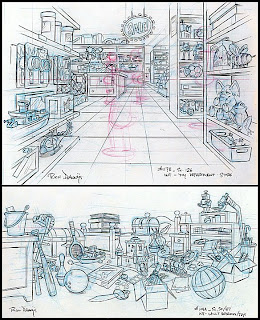 More examples of "stuff" crammed into the BG drawing.. Toys, this time!
I know it looks quite crowded, as is. But much of it eventually gets changed by the Layout crew, working in-house.. Where they work their Photoshop "magic" on it.. Removing stuff they don't want. And/or shifting elements around.. My main responsibility, is to ensure that every part is drawn using the same Perspective scheme. Otherwise, things can really start to go awry! 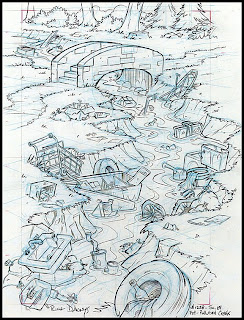 Here's one of the last shots I did.. An episode about the importance of Ecology. And how polluting a community creek, really sucks!
If you've got small children in the house,-- I'm sure they'd find the cartoon appealing.. You can find the show's "Official Website", by clicking here! There's a Preview to watch. And (I think) a number of online Games to enjoy, too!
Posted by Rich Dannys at 12:50 AM 10 comments: 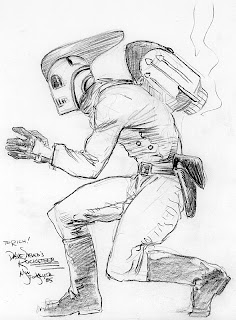 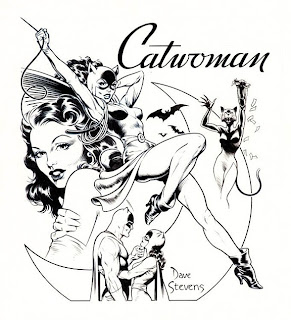 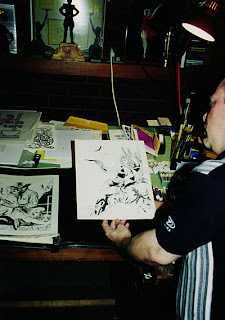 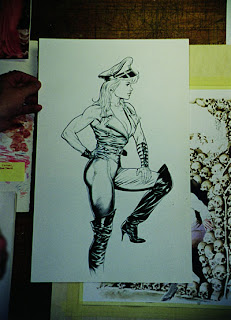 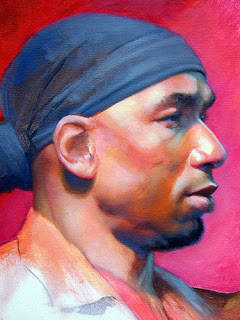