It's been awhile since I participated in an "Illustration Friday" .. But here is an entry for the this week's Theme: "Soaked". For whatever reason, I imagined a poor Clown being soaked by a bunch of misfit kids. Perhaps the setting is an oldtime kid's show like "Howdy Doody", where a bunch of audience members are allowed to soak "Seymour The Clown" with a bunch of different spraying devices? I dunno. Who's to say where inspiration flows from.. 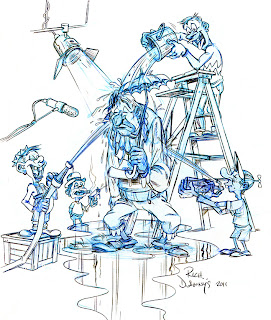 I didn't bother inking or coloring this one. Not enough time, currently. And the drawing has a few probs. But on the whole, I'm fairly happy with the way it turned out. It has the Wally Wood/MAD magazine qualities that I was hoping for, at least. 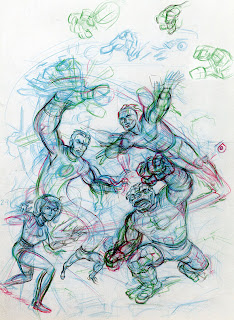 Many moons ago, I roughed-out a sketch of the entire 'FANTASTIC FOUR' group.. I'd bought a few of the Kirby/Sinnott ESSENTIAL trade paperbacks earlier; and found them really inspirational. That vintage artist team seemed to really click, on the series. And Joe Sinnott's slick inking, really made Kirby's pencilling sing!
Realizing that my original Layout would likely require some finessing, if I wanted all of the compositional elements to work.. I thought it'd be a good idea to put each character on a seperate page. They turned out pretty good, I thought. But unfortunately, I never got 'round to adding a background. Eventually I sold them all off thru a series of eBay auctions; promoting my 2003 self-published sketchbook..

More recently, I read that the 50th Anniversary of the FF would be one of many "themes" featured in the Souvenir Program Book at this year's San Diego Comic-Con.. So, I dragged out my old FF artwork & sketched out a Background that'd work behind what'd already been done.
There were parts of the old artwork that I was never quite happy with.. So, in addition to adding a background, I decided to "fix" stuff like Reed Richard's outstretched arm. As well as give The Thing a "new" face. Here's what I came up with: 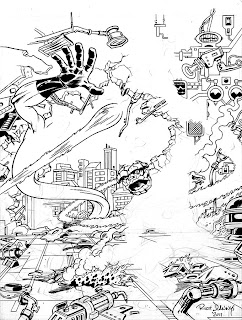 It looks a bit odd, with some parts still missing.. But drawing all the Kirby -type machinery/gear, is always great fun.. And because I had the character placements already blocked-out, I was able to (hopefully) spot additional elements, without making the Layout overly busy & congested.. Even so, it still took a bit finagling inside Photoshop to get everything to fit properly..

The only thing I was sure of, for the Coloring stage,-- was that I wanted the back wall (with the large hole) to framed using a darker tone. Ideally, this would contrast nicely against the bright skyline..
I decided to add a colored line for the cityscape, so as to not distract too much from my Foreground details.
Here's how the Final Art turned out: 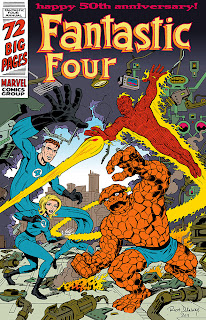 Even though I started working on this quite awhile back,-- the deadline of April 29th came up frighteningly fast. I barely got the image file sent off, just under the wire! With a bit of luck, the pic will see print at this year's biggest annual comic-book convention..
Anyways, it was a fun project. And one that I heartily recommend to any/all artists interested in self-promoting their abilities to a defined audience..
See ya!
Posted by Rich Dannys at 3:48 PM 1 comment: