A long time between Posts, I know. Been busy trying to track down some solid employment..
To keep my skills sharp, I jumped onto this month's JAM Thread in the 'Superheroes' section of 'The Drawing Board'.. This month's Theme is: "Weird Science".. In other words, any character that is featured as a Scientist. Or, the creation of a Scientist.. 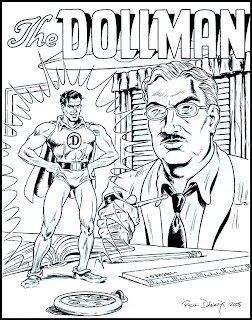 Well, being a HUGE fan of Golden-Age characters.. Particularly, anything that was done by Reed Crandall or Lou Fine.. I chose to add an illo of "The DOLLMAN" superhero; who happened to be both a Scientist, as well as his own creation!
Part of me thinks (also), that perhaps my choice may have been influenced by my fiancée's current obsession with Barbie Dolls? If you haven't checked it out, yet.. She started a new Blog that's JUST about that subject. Click HERE to give it a look-see!

Yup.. It was in 1939, that scientist Darrel Dane (working in the Lab of his mentor: Professor Roberts) developed a serum that was designed to shrink a man down to the size of Doll.. But rather than go thru a series of ultra-boring "testing",-- he decides instead to play the role of Guinea Pig, himself.
The serum works.. And he immediately shrinks down to approximately 6 inches in size! But his mind can't cope with the rapid change. And initially, he goes a little insane.. nearly killing his colleague/mentor: Professor Roberts.. 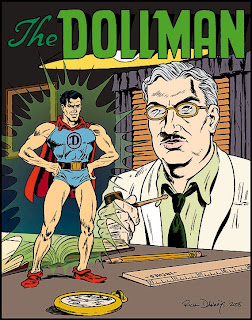 Fortunately, he soon masters the ability to change size.. And can eventually do so, at will. But rather than gaining wealth & power as a criminal mastermind.. He decides that these amazing skills must be exploited, for the wider Good of the World. And commits himself to devote his newfound powers to "crusade against all Crime & Evil!" *yawn*
Just kidding..

On the upside for him, apparently his girlfriend Martha (the Professor Roberts' daughter, natch) has no real problem with the fact that he's now hung like a gerbil!! ha ha
Pretty understanding of her, don'tcha think?! *wink*