Trips To The Fairground!

I recently finished a few more BG Layouts for the "Will & Dewitt" cartoon series, that I'm currently working on.. An episode that featured Will's Family attending their local Fair.. So, I needed to draw stuff like: Rides, Games, and Food Vendors, etc.. It seems every series I've ever worked on, has had at least ONE episode staged at a Fairground. And it got me to thinking about my own experiences at those magical places..

I dug thru the Lower Strata of my artwork archives, and uncovered a few examples of some previous "Fairground" stuff I'd drawn.. These BG Layouts/Location Designs, were completed whilst working over at George Elliott's previous studio: 'PICTOR'.. In 1997, we were contracted to do a lot of freelance Design work on MGM Animation's "All Dogs Go To Heaven" series..
This (above) is an Establishing Shot (Scene 1), from an episode in the 2nd Season.. I managed to work into my design, a tall sightseeing tower.. Which I loosely based on the old 'Bulova Clock Tower' that once existed on Toronto's old 'Canadian National Exhibition' grounds.. Or, more often referred to, as simply: "The CNE" or "The EX".

My girlfriend Suzanne, suggested that adding the "K-97" logo to it.. was a clever wink at the fact that the show was all about Dogs? I had to admit that I'm not smart enough to have made that, such a conscious creative choice! heh
Call it a happy accident, I suppose.. 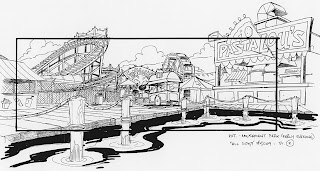 This Layout (above), is from the next shot (Scene 2)..
I think there was a Juggler or Street Performer doing something in the Left Foreground.. so it had to be relatively clear of obstructions.. Crowds needed to wander thru, etc. And yes, "Pasta Lou" was (in fact) spinning his pizza dough, somewhere in the Far Right..
I based the Roller Coaster (somewhat) on memories of the old, wooden "The Flyer" coaster; which also once resided at the CNE, before it (too) was dismantled & sold off somewhere.. I can still remember the familiar clack-clack-clack of the chain catching the coaster cars on each upturn pull.. 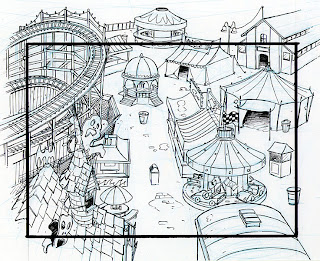 I had fun adding the roof of a Haunted House into this shot (Scene 21).. The main purpose of which, was mainly to show hordes of people, clamouring down the Midway. I know that the Carousel was supposed to be animated. And possibly, even the Coaster. But for the most part, those poor Korean animators probably had their hands full, just trying to complete all those ferschliggener crowd scenes?! OUCH!!
For some reason, this shot reminds me more of the old 'Markham Fairgrounds', than the CNE.. It was another welcome Summertime diversion, each year! And I still have fond memories of riding their legendary "Zipper" ride; 'til I practically keeled over, from nausea.. 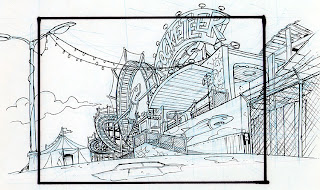 This was Scene 64, which featured Itchy & Charlie (the dogs) walking forward (in perspective) at a Worm's Eye View camera angle. If you look hard, you still might see a faint Red Line, where I've indicated my Horizon Line; which is actually BELOW the surface of the cracked pavement? A visual cheat, that I commonly refer to as: "the rolling 'Beetlejuice' horizon".. 'Cuz they used to use that damn technique, ad nauseum!
The Board Panel, originally featured: "Rocketman", as the name of the roller coaster.. Being a big fan of artist: Dave Stevens.. I sneakily changed it to: "Rocketeer", based on his popular comic-book character. And even tried to incorporate some of his design details (helmet fin & eyes), into how the coaster cars might look?
I never saw the final episode on TV.. So, I can't say for sure that any of it slipped past MGM's Legal Department.. But I'd imagine it went thru, unscathed.