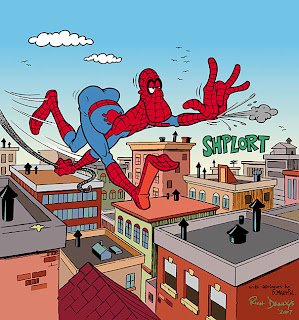 I've been meaning to become more active in some of the "Drawing Jam" threads that exist, over at 'The Drawing Board' community I'm involved with. I've been a Moderator in their "Instruction" section, for a number of years now..
They have a number of "Jam" threads stickied throughout most of the different sections.. If you're interested in joining, please do give them a look!

I chose to submit to the "Spider-Man" thread in the 'Superheroes' section.. It was a Drawing that I'd had sitting around half-finished, for a long while. And as it was finally apropos, now.. I decided to finish inking and coloring it..
You can view the original inked drawing, by clicking here!

If it hasn't already been completely obvious to you.. The image is meant to be a riff on the artwork of classic MAD Magazine's artist: Don Martin.. I had an old 3-pager he'd done, that featured a number of funny gags using Marvel's Spider-Man character.. Of course, I had to make sure that I also used one of his unique 'Sound Effects', too! hah

Don Martin passed away in 2000, after a battle with cancer. He was 68 years old..
In 1987, he stopped working for MAD. He'd gotten into a disagreement with it's publisher: Bill Gaines.. And for the next 6 years, did work for MAD's competitor: 'CRACKED'..
Sadly, Martin had degenerative eye condition, which made it increasingly difficult for him to draw, in his latter years. He had a number of operations, to try and remedy the problem.. But still required special magnifying equipment, and a handful of freelance"inkers", to help him complete most of his work..
Posted by Rich Dannys at 8:35 AM 10 comments:

The RIPPING FRIENDS in: "Beef Rescue"!

I've been in a bit of a drawing slump, lately.. So for a new Post, I decided to just drag out an older illo & try throwing some color onto it? Here's the result: 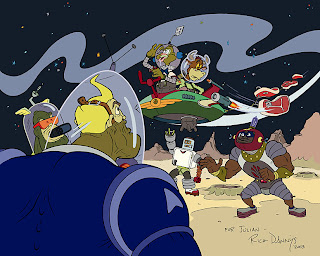 In 2003, a local Toronto kid named "Julian" approached me at a comic-book convention.. He asked if I'd do a "Ripping Friends" commissioned Drawing for him? I said sure. But then he told me that he not only wanted the entire Foursome.. But that he wanted them geared-up in the same Spacesuits they'd worn in the "Frictor" episode?! Oh, yeah.. And also? Please include at least 1 of the cows that were in the "Ovulator" episode, as well...
Sheesh!!

Well, I always enjoy a challenge.. And fortunately, still had all of the necessary Model Sheets, too..
So, I simply invented a screwy scenario where 'Jimmy The Idiot' and the Cow, were rescuing the stranded RF team, somewhere on the Moon.. Bringing them heaping helpings of sorely-needed MEAT, to sustain their heroic strength!! heh