Here's a quickie illo I did for the current Jam Thread in the "Superheroes" section of 'The Drawing Board'.. This month's Theme is entitled: "Appearances Can Be Deceiving.." In other words, characters that wear disguises, can change their shape.. Or, are simply pretending to be something/someone that they really are not..
I chose a character that I really know next-to-nothing about: "The FACE"!! 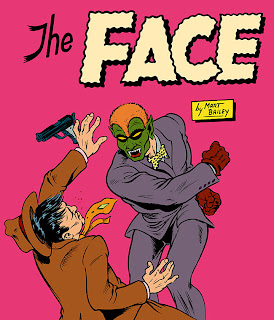 According to what I could find online about him.. "The FACE" was a WW2 war correspondent who fought America's enemies with his typewriter (as journalist Tony Trent).. And with his fists, as the crimefighting "FACE" alter ego!
He debuted in Big Shot Comics.. And was spotlighted in his own comic-book title, during the early WW2 years.. He later reappeared in 1948 and 1949 for a couple more issues, under his civilian name: 'Tony Trent, The FACE'!
The creator of 'The FACE' was Mart Bailey.. A solid artist, who earned a quick reputation for direct storytelling; though perhaps, without a lot of flair. Not much is known about him, really.. He worked as an Art Director on the children's comic-book series: 'Treasure Chest' thru most of the 50's.
Sadly, his career was apparently cut short sometime in the 1960's, after he endured a violent mugging..

I would never have heard of 'The FACE', had it not been for my good friend & fellow artist: Drazen Kozjan. He e-mailed me the following artwork as a JPEG.. An item that he'd purchased on eBay, a few short weeks ago.. 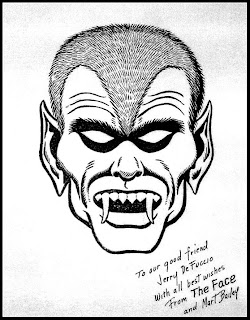 "Ain't it the most, Daddy-O?!"
We both agreed that this fabulous image has a genuine Charles Burns "feel" to the overall Design & Inking.. Can't you just see Burns doing a riff on this guy? It'd be brilliant! Give 'em a crazy 'El BORBAH' -type crime story, with a lot of witty banter & fisticuffs?.. I'd definitely get in line at my retail shop, to lay down my buckaroos for that comic-book!
Posted by Rich Dannys at 8:42 PM 5 comments: