Yes, it's finally come to this, Dear Friends..

Last month, I was contacted by a friend that works at a local Ad Agency.. I'd done some freelance illustration work for him, in the past. But this time, he promised me that he had "real work" for me to do..
Turns out his company had been hired by an International Foods conglomerate, to reinvent the Character Design for a line of their peelable Mozarella Cheese.. They'd been market-testing their existing Character model.. And found it wasn't really connecting with the 11-12 year olds, like it was intended to..

Now I'd done some freelance illustration work for advertising, before.. But this was going to be a bit different, in that it was purely "Development Art".. Rather than, finished packaging artwork.
They wanted something that was fun & light-hearted. A bit kooky. But with a little Hollywood "cool", as well.. He supposedly leads an "active" lifestyle. So they suggested he might possibly be an X-Gamer or Superhero -type, too..

This was my first pass, on the thing.. 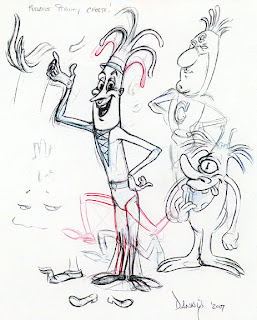 Really, I just wanted to try and nail down what Body Type he would be, first.. The long & wiry scheme that they had already, seemed to work best. It shows off the flexibility best, etc.. It's such an odd foodstuff, that I imagined maybe an off-the-wall Wally Wood -type Alien guy might work, too. But it ceased looking like the actual stringy Cheese product..
I did a number of different approaches.. I think they liked this guy, the most. Though they mentioned it was perhaps looking a bit too "retro". And was skewed too old for their target audience..

I kinda dug the idea of doing a few Superhero -types, too.. The one guy in the cape, was a riff on the character designs of cartoonist: Benito Jacovitti.. I confessed to the agency, that the small cheese snake, was (in fact) a verbatim ripoff of one of his designs. And really wouldn't be a good idea to use.. 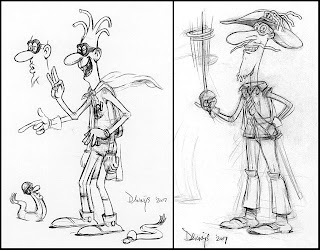 My girlfriend Suzanne & a few other Animation friends, liked that one best..
The "Cheezkateer" was a last-minute idea, of mine.. Trying something a bit different, just to see what the reactions would be.. 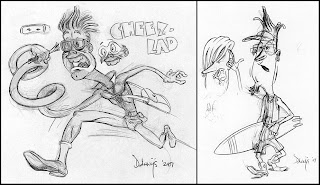 One of the ad execs suggested that perhaps a Jack Cole 'PlasticMan' or FF's "Mr. Fantastic" might be a good jumping off point.. given their flexible/bendable nature? I liked the idea, immediately. But I wanted to retain the goofiness.. So I came up with "Cheez-Lad". Who I imagined as a kind of pimply/awkward Teen.. The kind that used to appear on those 'Firesign Theatre' comedy records! haha
As an afterthought, I also did a Surf Dude.. I wanted someone not quite as goofy. A bit more Beatnik & Bohemian.. Yet, still "active". I like the way the jaunty walk turned out, here..

Though I didn't tell the agency outright, I wasn't terribly keen on the 'X-Gamer' approach.. If only, because it would entail adding a lot of inane Safety Equipment (Helmet, Knee Pads, Elbow Pads, etc).. bogging down the overall silhouette. And killing the stringy hairlines, I'd been working out.. 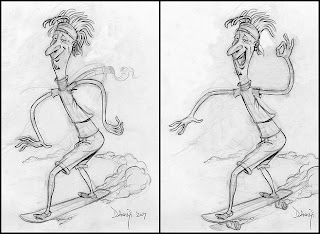 In the end, I think I liked the Surfer Dude idea the best.. It could just as easily be Snowboard or Skateboard, I suppose.. I amped-up the thin/stringy quality, and felt I was getting closer to what I wanted..
The one featured above, has the slacker/hedonist thing going.. But he still looks a bit too poufy/gay.. Maybe it's the damned Turtleneck, or something? He has that arrogant Parisian "look" about him.. And, that wasn't my intent.

Anyways, the job was real good FUN!!
It's not often you get paid decent money to just "play" with Visual Ideas.. And I'd certainly welcome the chance to do s'more of it again, soon!
Though I've been paid for my work .. I have (unfortunately) not yet heard how the Project is proceeding.. I know that there were a few other artists that were also contributing Designs for this.. So perhaps, they've chosen to go in a different direction entirely..

Sorry, for the long delay between Postings.. I'm hoping the next one, won't take quite so long.. See y'all later!!
Posted by Rich Dannys at 7:04 PM 10 comments: