It's hard for me to believe that I let another entire month slip by, before updating my Blog.. I had the best of intentions to post something in January. And had started a number of drawings that I thought would fit nicely. But alas, Life seems to always find a way of impeding my completion on these things...
In any case, I'm well past due for a Blog update. So I went thru the vast pile of unfinished illustration ideas & unearthed a couple of older sketches. Composited in a bit of "newer" stuff, too.. And figgered this would make a sufficient posting? I hope so..
Below, is one of these: 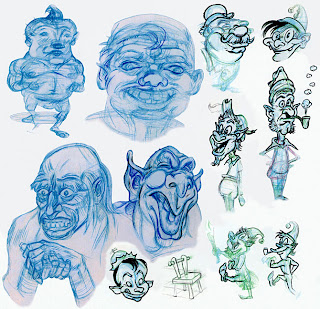 Some of these sketches are pretty loosey-goosey. My stuff usually ends up more finished-looking.. But I think the 2 weird figures at the Top Left were supposed to be a kind of strange Charles Burns -esque 'Santa Claus'?! I can't even remember why I did these..
The gaggle of more-finished "inked" figures are Elves, which I may still use in a future Christmas Card. I like how most of these turned out.. There's a nice contrast in the overall variety. I can recall the l'il marching ones, were adapted from a Frazetta 'Funny Animal' comic.. Always a fun exercise!
The other blue-pencil ones along the Bottom, were studies I'd done from a pre-code 50's Horror anthology, I purchased recently. In fact, I'm 99% sure the Ghoulie-Guy rubbing his hands, is from a Jack Cole story.. Cole was a brilliant artist whose artwork I cannot seem to get enough of! 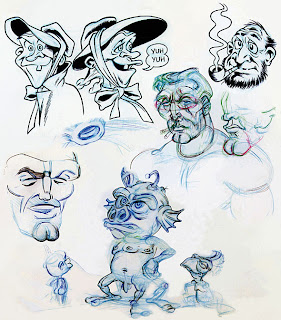 The above sketch page, is a little more finished.. But again, the ideas/concepts were never incorporated into anything I felt was worth completing. The inked stuff along the top, are studies from a classic Wally Wood MAD story, entitled: "Wreck Of The Hesperus".. The idiot daughter in that one, never ceases to crack me up! hah
The bottom tier is quite Wood-sy, too. Essentially, more riffs on his style.. A couple of weird Alien figures, in all of their resplendent nekkid-ity!
The stern-looking Male faces thru the middle, were an idea I once had for a kind of 'NICK FURY' -style Super Spy. He was supposed to look a bit like Robert Mitchum, I guess? I can't recall.. But I did like the way all of the l'il Ass Chins turned out on these! haha

Anyways, hope you'll enjoy perusing some of the detritus from these projects?..
Because I'm pretty positive there'll be more Doodle Dumps, in my future!
Posted by Rich Dannys at 10:23 PM 5 comments: