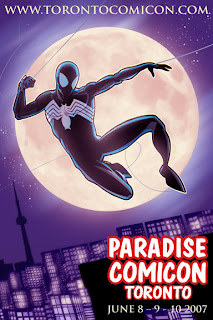 Well, a complete week has already slipped by since the Main Event.. But I'm in desperate need of a Blog update.. So, I'll ruminate a tad on this past weekend's big 3-day 'Toronto Comicon 2007' event!
It was a very enjoyable gathering, as per usual.. But unless I'm imagining things,-- the crowds seemed a bit thinner than previous years? The CNE location is such a BIG Hall though, that sometimes it just "feels" like there's fewer people? At least, to me..
It's still not an ideal venue, in my opinion. And I know the organizers are aware of it, too.. It simply lacks the intimacy of their cozier 'Holiday Inn on King' venue; which they use for their 1-day conventions..
I got to meet up again, with a number of great friends.. Though, I didn't actually bump into other artist chums, 'til the last day of the Show.. And some of those, not 'til the dwindling hours on Sunday!
Talked briefly to Paul Rivoche, Cameron Stewart, and Michael Cho, too.. Finally got to trade books with Blair Kitchen and his brother Mike.. As well as, catch up with a few of my older Animation compatriots: David Bluestein, and Kurt Lehner..

Paid my respects to Darwyn Cooke, too.. And asked him how his 'NEW FRONTIER' direct-to-video, was proceeding? He told me that all of the North American production work was complete. And that it was now in the capable hands of overseas animators.. Hopefully, it'll turn out alright.. I know Darwyn was a stickler for ensuring that this 2D Animated Feature remain true to his approved Final Script.. So, hopefully, the resulting DVD, will be a memorable one!

I also got to meet up again, with a number 'Drawing Board' friends.. One memorable friend, in particular: Kieron O'Gorman.. aka "untamo1".. Who made a point of dropping by my Artist's Alley table each day, just to shoot-the-breeze, and talk Art, etc..
Kieron currently works fulltime as a Software Tester.. But is looking to changeover to an Arts career, someday. Considering the artwork he shared with me,-- this guy has got TONS of potential.. He'll do fine, in whatever artistic field he chooses to enter!
As a way of expressing "Thanks!" to whatever meagre advice I was able to share with him.. He gifted me with this beautiful Superhero gal, shown here: 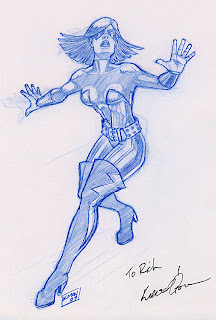 Every convention, I renew acquaintances with some of the more-devout members of Toronto's fine Comic-Book community.. And from my personal experience, 2 of the very-best of these, are: 'Milo' & his girlfriend: 'Kathryn'..
Every show, they make a point to drop by & say "Hello!" and ogle my artwork.. It gives us artists a well-needed EgoStroke. And we (and our artwork) begin to feel a somewhat valuable, to the wider World?
I know that my "free sketches" may have SOMETHING to do with them consistently coming by my Table, too? haha

I'm generally a pisspoor Con Sketch dude.. But lately, I've been getting better at it.. Milo was smart enough to play to my own perceived strengths.. And this time, asked for "The Old Witch" from the vintage 50's-era EC Comics.. A character I've drawn a few times, before..
This, was the result: 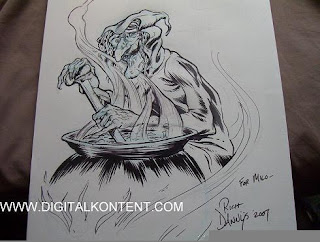 I noticed later on, that I'd forgotten to draw a 4th finger on her Right Hand? Oh, well..

Milo also writes (and podcasts!) regularly for an excellent online Comic-Book resource, entitled: 'Digital Kontent'.. You can follow the Link posted in the above JPEG.. Or, if you'd rather read specifically about his 'Paradise Comicon 2007' experiences.. THAT Link, can be reached by clicking here: 'shplort'!!

Have a Great Weekend, everyone!! And I'll TTY'all again, soon!
Posted by Rich Dannys at 5:16 PM 9 comments: