Luke Seerveld is one of my best-est buddies from my High School daze. Along with our other good friends: Marty Sytsma & Ed VanBeilen, we toyed with the idea of eventually creating our own Film/Media company; as a possible future business. Even going so far as to load up with equipment & make a couple of Super-8 films together..
Marty & Ed went on to other things.. And I continue to struggle to make a living as an Animation artist.. Of the four of us, only Luke has gone on to become the multimedia bigshot, that we'd all dreamed we'd be..
After attending college in the States, he moved to the suburbs of San Francisco.. And now owns & operates his own successful production company: Seerveld Media!

In October 2004, he surprised me with an e-mail.. Asking if I might help him out on a job that he was doing for a company named: Fat Box Films. They needed a Cow character designed that would serve as a computer-animated spokesperson, for a Cheese processing plant?!
Not one to turn away a job,-- I jumped at the assignment! And began sketching out a few ideas: 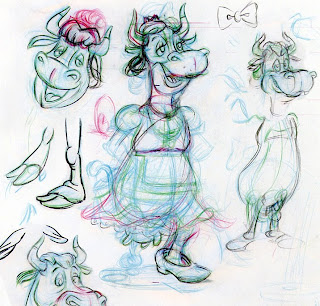 They had already had some previous design work done on it. But Luke (and the client) felt that the "look" was all wrong. And that their Cow needed to be: "happier, kinder, gentler.. and feminine, but without being too sexy!"
They specifically asked for something that has a: "Toy Story" or "Finding Nemo" quality.. As I wasn't sure exactly what that meant, I opted for a more traditional 40's-era Disney-esque style to it?
After feeling things out a bit.. I came up with the Turnaround that you see below.. Isometric views that would help their CG artists better engineer an effective 3D model.
I think I probably photoshop'd-out the "steaming dump" at her feet though, before sending it off. A touch that I'd only intended for my buddy Luke's personal amusement! haha 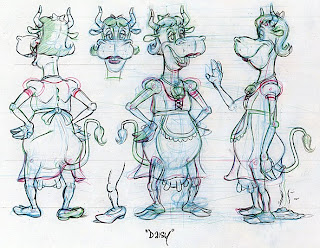 The cow was to be a simple brown Jersey, named: "DAISY". She would act as a sort of 3D "hostess" for tour groups visiting the Cheese factory; narrating live-action footage on the specifics of how their Cheese is made, etc. As shown from monitors set up throughout the processing plant's 'Visitor Center'..

Luke told me that the client was somewhat startled by my "retro" take on "DAISY".. I'd spent a fair amont of time trying to figure out things like: costuming details. Or, how I could convert her Hooves into a pair of expressive hands that might help her "act", during her video performances?
I think that the client appreciated my attempts to add a bit more sentimentality to her. But they still made a few slight adjustments to what I'd done, before they got to their Final Model..
Which looks (in appearance) closer to a Preston Blair -type cow: 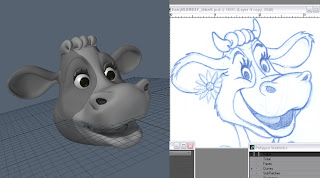 Here's what "DAISY" ended up looking like, fully-modelled & with her colors added.. Nice, eh? 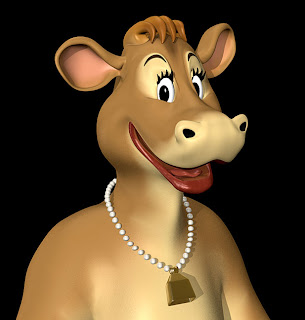 I was happy to see that they kept the Lipstick'd mouth and the cowbell necklace I'd played around with. But I guess I had imagined that she'd appear more as a full-standing figure; rather than a character seen only from the chest-up?
Removing the Horns was a very smart move, tho.. It immediately makes "DAISY" different from "Elsie", yet retains much of the overall feel!

A fun Conceptual Design assignment that I wish I'd get more requests for.. Any takers out there? LMK!!