Yeah I know, it's been TOO long between Posts for me.. But a number of Freelance projects occupied my time, and kept me too busy to present anything new here..
But here's an Image that I've just completed.. It's yet another "Hall Of Fame" -type personality, in the ever-growing BURBY Baseball Card series!
This time 'round, our featured ALL-STAR player, is none other than: John Lei.. Another Animation guy, that I met (and worked with) thru the late-90's.. I think we first met at the (now defunct) 'Phoenix Animation' studios?
Unfortunately, I don't have any "Lifetime" stats recorded for John.. So, I'm going to assume that he only started playing Burby, sometime after 1996?
I can tell you that he was a solid Pitcher. And always batted somewhere in the high .300's! The important personal stats that John provided me with, are as follows: Born in Hong Kong, in November of 1970. Stands 5' 7 1⁄2" tall & weighs 142 lbs. Bats: Right and Throws: Left..

Every Card first starts out with some reference photos.. Which I shoot, as best I can. John's photos turned out a bit dark. So I had some difficulty making out the details around his eyes. But he gave me a solid hang-dog/all-business expression.. Which makes the drawing, all that much more fun to do!

I won't bore you with all of the "process" details again, re: the making of John's card. But if you click thru the "Burby" tag at the bottom of this Post.. You'll be able to follow the same techniques, which I used on Sasa Radosavcevic's artwork.
Again, the coloring is intended to mimic the old 50's-era "painted" Baseball Cards.. Slowly applying light washes of pencil crayon color, blending them carefully to build the right tones/values. I didn't take very many scans of the card as it was being put together.. But here's one, to help give you an idea of what I'm talking about: 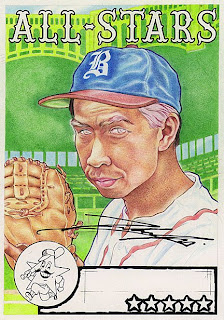 The white shirt John had on in the reference photos, helped me map out the Red piping on the Jersey. And I altered his Black Glove to a more traditional leather color scheme. As I couldn't find any examples of Black leather gloves in any of the 1950's reference I had..
Below, is the finished Final Art: 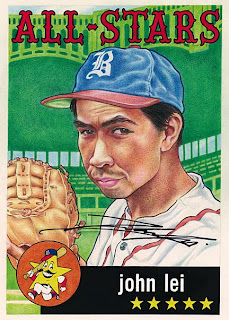 John (and his wife Sasha) have been longtime friends of both myself & my sweetheart: Suzanne.. So, when we finally decided to get married, last April.. John and Sasha, were natural choices to act as witnesses at our Wedding. But what I only had an inkling of then, was what a great photographer John was!
We were both ecstatic when John also offered to take a series of Wedding photos of us, during/after the ceremony. Which he presented to us on a digital CD, about a week later..
I look a little "pink" in this one, but Suzanne looks fabulous here: 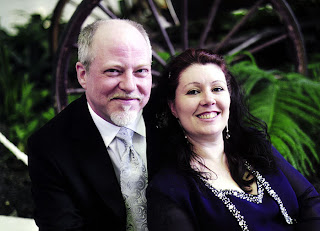 The game of Burby has under gone something of a resurgence here in Toronto, lately.. Mainly due to the diligence of it's organizer: Adrian Golombek. You can follow the week-to-week progress of the highly-organized 'Toronto Burby League' by clicking thru on the highlighted Link.
Me and John had a bit of a chuckle when I described the differences between their version of the game, and the version we used to play.. But I've gotta give credit where credit is due. They're definitely a highly-motivated bunch of players!

I think I've now got about 2 (possibly 3?) unfinished Cards, left to complete. The Chris York one, has literally been "half done" for quite a few years now. . At this point, it's become a real grind to finish them. But I'm so close to finishing the entire set, I almost feel I have to get 'em done!

I'll be keeping my fingers crossed, 'til that day arrives.. See ya!
Posted by Rich Dannys at 5:57 PM 5 comments: