The Genius of HANK PORTER..

I was cruising thru sections of eBay a few nights ago.. When I came across a Seller that was auctioning off samples of 'Original Art', by Disney artist: Hank Porter.. Most of these, look to be developmental sketches.. Or perhaps, ideas that never made it Final Art.. But they're still mighty cool to look at! 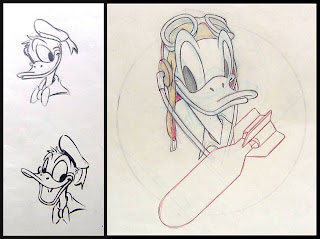 After I attended Sheridan College in the early 1980's.. I spent some time working retail for 'The Dragon Lady' comic-book shop, here in Toronto.. It was then, that I first discovered Porter's work as a Designer of military insignia for various WW2 detachments. The designs would occasionally appear as full-page promos, in the older issues of 'LIFE Magazine' that we'd sell..

There was something about these Designs, that fascinated me.. Seeing familiar Funny Animals, acting in overtly aggressive ways.. These emblems seemed an ideal blending of Cartooning & Illustration disciplines. Iconic poses of animated creatures, delineated in rich colors & lush inklines!

Not long afterwards, I wrote to the Disney Archives, asking if they could help direct me to find more of this WW2 material? Their Archivist: David R. Smith wrote back a kind letter, stating that almost ALL of the Disney insignias were printed in a Stamp series once, designed to raise funds for the War Effort.. But that due to a lack of interest, little of this material has ever been republished by the Disney Company.. And he felt that there wouldn't be significant public demand, to reprint them now, etc.

Well, he must've received a few more inquiries, after mine.. Because only a few short years later (in 1992), 'Abbeville Press' published the terrific 'Disney Dons Dogtags' book! An album that I dearly love.. Yet I wish it had been more complete, too.. As it contains only a fraction of the overall artwork, actually created. 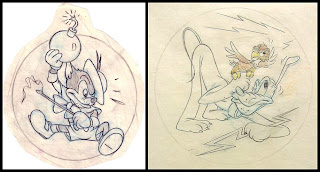 Hank Porter began running his own successful Commercial Art studio in Buffalo N.Y., in 1925. He later applied for a job at Disney, in 1936.. Where he became a valuable staff artist in their Publicity Art Department, 'til 1950.
From the very beginning of WW2, different military units began adopting divisional "mascots" as their representative insignia. And though both the 'Walter Lantz' & 'Warner Bros.' studios also contributed insignia designs,-- the lion's share of them, were still created by Hank Porter thru Disney Studios..
Porter headed up Disney's official 'Military Insignia' department.. Designing & drawing most of the emblems, himself. And supervised the work of others.. including, artist: Roy Williams. Simultaneous to this work, Porter also contributed artwork for many of the illustrated adaptations of Disney's 'SILLY SYMPHONY' cartoons; that appeared monthly in 'Good Housekeeping' magazine..

If you can still find the 'Disney Dons Dogtags' book.. I heartily recommend getting a copy!
To read (and SEE!) more about the career of Hank Porter (and others),-- I'd also direct you to visit the most-excellent David Lesjak BLOG entitled: 'Toons At War'..