Season's Greetings, everyone!
Here is the 2010 version of my annual Holiday Card.. 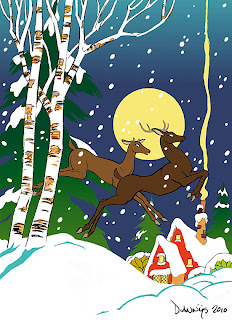 This year, I attempted another Art Deco motif; based on a few vintage cards that I've managed to collect off of eBay over the years..  Overall I'm happy with most of it. But in hindsight, it's probably a bit too close in overall design, to the Holiday Card that I did back in 2007..
The coloring was done digitally.. For the most part, it was applied color-to-color, without any holding lines. I cheated a bit here and there, though. The Birch Trees actually looked better with the remnants of linework, I thought..
Unfortunately, while the series of Gradient Fills I applied with Photoshop, looked pretty decent in the original file on my monitor.. The subtleties got a bit muddied in the actual printouts I received back from Kinko's.. Skewing everything, slightly darker. Parts of the Deer got lost on the Night Sky. As did some of the Pine Trees, etc..

The experience of making/sending out the Cards this year too, was somewhat bittersweet. As this was the type of project that I would traditionally do with my Mom; who passed away just last year. In fact, looking back.. I think I did it more for her, than for myself. She would nag me about getting the Cards done. And for whatever reason, I would always wait 'til the last-possible-minute, before actually finishing them. It was a real Dannys Christmas tradition! bwa-hah

As mentioned in my previous Blog posts,-- any Christmas Card done BEFORE my Birthday, is a raving success story.. So, I did alright this year! But I'm a man of limited financial resources, so I wasn't able to printout quite as many copies as I once did. But if you're on my Card List, expect a hard copy in your mailbox soon.. For the rest of my friends, I hope that this "digital" -version of the Card will suffice? Y'know, they say it's the thought that counts, in the end..

Anyways, I hope that everyone has a terrific Holiday Season.. Best Wishes to everyone at Christmastime!.. And hoping you have a fantastic 2011!
Posted by Rich Dannys at 2:19 PM 6 comments: