For Dave: IRMA The Body! 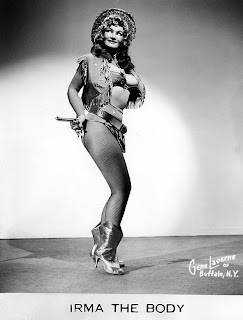 Heya!
Time for another of my Stripper/Burlesque posts, methinks?
If you're a comic nerd like me.. Then you already know that the San Diego Comic-Con 2008, has just ended. I didn't get to go, this year.. And I'm not that sure that I'll ever go, again. I keep hearing how crowded it is. And how it's changed for the worst, lately..
To be honest, my main reason for attending the convention in 1999, 2001, and 2003.. was to meet my favorite artist: Dave Stevens!
I had been e-mailing with Tom Ranheim for many years.. He's the webmaster of the official Dave Stevens website.. And, also a good friend! We decided we'd go make the trip to San Diego together, in '99. And again, in 2001..
By the 2001 trip, we'd gotten to know Dave quite well.. Gone out to dinner with him. And we were invited to his home/studio, too. It was quite a revelation, seeing all of his Original Art up close.. Intimidating, too!
In any case, Dave & I shared a passionate interest in 50's-era Striptease/Burlesque. And as it happened,-- I'd just acquired a slew of great stuff off eBay: the personal photos & scrapbook clippings of "IRMA The Body"; one of Burlesk's top performers, back in the day!
I picked them up in California, during the trip.. Fortunate for me, the Seller lived just north of San Diego!
Well, Dave couldn't wait to dig thru my cache of goodies.. And decided then-and-there, that he would love to do a painting of "Irma" (her real name was: Mary Goodneighbor). For reference, he borrowed the 2 candid photos, shown below:

"Irma" was a real looker, don'tcha think?!!
The one on the Left, was taken during a photoshoot celebrating her engagement to a man attending a Naval Academy. The relationship didn't last, and they never ended up getting married..
I prefer the photo on the Right.. I think she really looks great, in that pose! Hard to believe the photo was taken in 1970.. She still looks so young. And I'm pretty sure she had "retired" from performing, by then.
Dave sent me back the photos thru the mail, once he'd made copies.. I honestly dunno if he ever got 'round to painting "Irma". I guess we'll find out when his big 'Art Of' book gets published, sometime next year..

Today, would've been Dave's 53rd birthday.. When he passed away from Leukemia earlier this year in March.. It didn't hit me quite as bad, as it does now. I guess I associate him so closely to the San Diego Comic-Con.. A convention that he volunteered at long ago, way before he ever became a professional artist..
Here's one of the last illustrations that Dave completed before he died.. It was a commission for fellow CFA-APA member: Wally Harrington. A great guy & a personal friend of Dave's, over many years.. 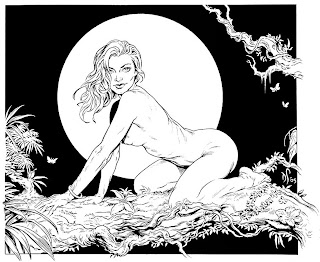 I've been trying to find some online reports about the "Dave Stevens Memorial" panel at SDCC '2008, without much luck.. If anyone knows where I can read about how that event went.. Please post a weblink, in my Comments section.. I'd love to see some photos & read what was said!
It's sad for me to think that there won't be anymore "new" Dave Stevens artwork to anticipate.. Hopefully, there'll be a ton of unseen gems in the Arnie Fenner -produced hardcover, due in 2009! 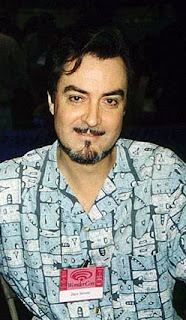 I picked up the most recent issue of 'The Comics Journal'.. There's an excellent Dave Stevens memorial piece in there, written by his dear friend: Bill Stout.. I was surprised to learn that Dave had been diagnosed with his cancer, back in 1999. A terminal diagnosis, that generally means the patient has only months to live.. Dave hung on, for a full 8 years longer!

I'll cherish the memories of "hanging out" with Dave, the few times I did. I'll miss his e-mails especially.. He had a very witty writing style, even when he didn't write often..
I hope that he's up there somewhere, without pain.. Sitting in the Front Row of the best dang Girlie-Show that ever was!!
Posted by Rich Dannys at 10:46 PM

Nice drawing , don't think I've seen that one before.

Great color pics you lent him. Love the colors in them.

i like old photos, especially of hot 50s women. once i get my new scanner i'm starting a blog where i'm gonna scan all of my vintage girlie mags from the early 60s/late 50s. IT'LL BE AWESOME!!!!!!!!!!

Dom --
The drawing started out as a "Shanna the She-Devil" sketch.. Which Harrington commissioned Dave to polish up & ink.. Dave did so, but preferred her without the costuming details. Even so, Wally had to wait a couple of years before Stevens was satisfied with it enough, to hand it over! hah

Ryan --
I'm with you, man.. I LOVE the 50's-era Glamour Girls!! You make the Blog.. And I can promise you, I'll be a regular visitor!
Been thinking of making a 50's Burlesque/Striptease blog, myself.. But there are too many out there, already.

Dave Stevens sure could draw women well! What's great is he made them all look different....not like some artists who give them ALL grapefruit boobs! He was truly a master of female forms.

Irma The Body caused quite a stir in my dad's neighborhood a few years ago. A local surgeon fell in love with her at the Toledo strip club and convinced her to marry him. She was very different from the other U of Mich. faculty wives. One story has her falling down in the street wearing only a fur coat, and the police had to call for backup help to get her home. Is that marriage mentioned in her scrapbook? I'd love copies of anything relating to that time.

Tim --
Thanks so much, for your Comments.. Sorry, I didn't respond to them sooner!

Yes, Irma married a neurosurgeon named "James Taren" in 1959.. He was also a medical professor at the U of Mich, as I understand it..

I can imagine that Irma must've created a stir at some of the Faculty get-togethers! hah
And perhaps that's ultimately why their marriage lasted less than 2 years? They were divorced, sometime in '61.
I was told that Mr. Taren retired to Hawaii. And may still be alive.. Dunno if that's true.

I had not heard of the "falling down in the street" story.. Irma did some brazen things in her Strip career to generate publicity. But public drunkeness wasn't one of them..

I don't have many articles specifically related to her marriage, unfortunately.. I know they made a trip to Vegas together. And that they honeymooned in Miami..

But if you'd care to exchange more info on "Irma The Body", I'd be delighted to do so.. Just LMK how I can get ahold of you.

Enjoyed your stories, pics and comments about Irma The Body. I attended Hawthorne High School (NJ) with her and remember walking down the halls behind her during 1947, when she wore short-short dresses which were not yet in style then.

Thanks for the info, "anonymous"!

Yeah, Mary definitely attended Hawthorne High.. And I have no doubt that she could fill out a short skirt, in a fantastic way!! hah

Would love to get my hands on some of her old high school photos.. Do you have any you could e-mail me? LMK..

You can reach me at:
gr8gzoo_at_idirect.com

I was surfing and came upon your blog. I saw Irma the Body perform in 1968 at the Mayfair Burlesque, Dayton, OH. I was a senior in high school, and I and my buddies waited for her outside the theater after the show. She came down the street with 2 Welsh Corgi puppies on a leash, commenting "The Queen of England owns dogs like these, boys." We helped her pack her bags into her pink Mustang. Then she gave each of us autographed postcards depicting "The Body".

A couple years ago, I learned that she became a breeder of Corgis and appeared on the '60s TV show What's My Line.

Thanks so much, for dropping by.. And especially, for adding your comments to this Post!

Yes, it was common for Irma to travel with her corgi dogs, while on tour.. In fact, she'd coincide a lot of her appearances, so that she could also enter her animals in local Dog Shows. I bought a few of her photos on eBay, after she passed on. And some of the Ribbons her dogs won, were included in some of the Lots!

I've heard about the Pink Mustang, too. I imagine she must've been quite a sight, driving from Theatre to Theatre.. hah

I know she bred the dogs, with the help of her Mom.. Hadn't heard the story about appearing on "What's My Line?" though. Thanks for the info!

My dad is 83 and dated Irma while he was in the army for quite a while. I would love to know if any of your pictures include him. I have some very interesting stories of some of the time they spent together. He would be amazed to see a pic of them together. You can reach me at quickt2@aol.com thanks

I have just installed iStripper, and now I can watch the sexiest virtual strippers on my desktop.