Okay, here's a couple of 'Noir'-esque doodle pages..
I do these when I'm bored. Or sometimes, when I'm trying to get out of a drawing funk. A bit of both, in this case..
Essentially what I do, is drag out a bunch of my favorite Golden-Age CRIME comics.. And start drawing the Faces & Figures that strike me as the most interesting/intriguing. Sometimes, I'll do a straight facsimile. But more often than not, I'll attempt to "push the pose" by distorting the proportions. Or even, change Heads & Costumes from one character to another..
It's fun exercise & a great way to build an understanding of another artist's process! 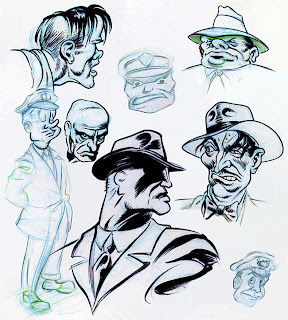 As usual, most of the Ne'er-Do-Wells on these sheets, were inspired by looking at a lot of early Will Eisner & Jack Cole artwork.. It's a mix of Cops & Robbers. But as you may have noticed,-- it's mainly the Gangsters that got the full "inked" treatment. I suppose I just find the Bad Guys more fun to finish.. Humble apologies, to John Law!

Most of the Gunsels on this 2nd Page, look like they're from an early installment of Eisner's 'The SPIRIT'.. Probably from the Jack Cole period of that comic-strip series. I can't get enough of his slick cartoony artwork. Fun poses, always. But also, always beautifully drawn! 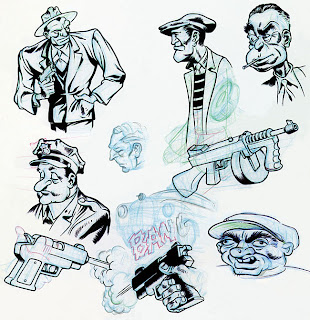 I'm not entirely sure where I pulled the crazy walleyed Lummox on the Bottom Right from? He definitely looks like trouble with a capital "T", though!

These are really nice. Great variety and personality.

I def see a Cole influence ;)

Brilliant collection of mugs ya got there Rich!

Only one thing left out though - the Molls. For example, one of my old favourites is from the cover of Famous Crimes #3, the Canadian edition naturally.
Check it out at: http://collectorsassemble.com/archive_image.php?issue_id=318&func=front

Thanks for the visits, Gentlemen!

Dom -- Thanks, man.. Why would anyone try to HIDE their Cole influence, eh? hah
BTW, I heard the Frazetta Comic Art book is out in T.O. now!

Jim -- Always good to hear from you.. And you always seem to have the goods on where to locate the primo Golden Age stuff.. And this one, was a real beauty!!
Thigh-high fishnets, and lil hearts on the Headlights.. Ya can't do better than that! hah

How about the book on Frazetta's comics? Get it yet?

Unfortunately, they recoloured most of the pages.

I did pickup the Frazetta Comic Treasury book.. It's a good book. By no means, a great book..
Perhaps my expectations were too high for it. But I certainly would've preferred that they had skipped the color. And simply stuck to presenting the actual 'Original Art'in the best way possible..
As seen, in some of the examples printed in the 'Intro' and 'Foreword'. If they couldn't locate the originals.. I'd have to think that a camera-freak like Frazetta had a lot of "film" of the art pages?

For me, the Coloring simply gets in the way of fully enjoying Frazetta's artwork. And much of the coloring, is quite garish & gaudy, in my opinion.. Way too many Photoshop filters and Gradient fills, etc. And failed attempts at creating "modelling" on faces, that really don't need it.

The flatter coloring found in most of 'Personal Love' stories, (keyed from the Fantagraphic comic reprints) seems a more logical approach.
Though I did like the subtle colors applied to the EC "Squeeze Play" story. Which I'll assume was keyed from the printed color scheme of the 50's comic-book..

For a fanatic like myself, it's no biggie. I already have most of the stories, in multiple formats.
For me, the highlight was the Caniff-styled "Judy Of The Jungle". Which I'd read/heard about, but never seen..

Picked the Frazetta book up myself , and enjoyed it. Have the same reservations about the coloring too.

My oversized Russ Cochran reprints are much better.

Not much Fritz stuff either.

What a bunch a characters! Real nice inking too, Rich.