Last weekend, me & Suzanne caught a matinee of the HELLBOY sequel.. It wasn't as good as the IRON MAN movie, but a vast improvement on the first HELLBOY film. Which I only caught up with recently, on cable..
We both enjoyed Del Toro's PAN'S LABYRINTH quite a bit. So the Design work we saw in the Preview ads, really caught our eyes. You can read Suzanne's comments on the movie here, on her BLOG..

There was a time years ago, when I was quite the ravenous HELLBOY fan.. I read all the comic-books. Bought all the collected volumes, etc. Wore a HELLBOY baseball hat, everywhere I went.. A friend bought me the HELLBOY lighter, even though I don't smoke.. I even picked up one of the HELLBOY lunchboxes, 'cuz I thought it looked too cool..

While visiting the San Diego ComicCon a number of years back,-- I even bought a few pages of 'Original Art' from Mignola himself.. He was even kind enough to throw in a complimentary (and highly-collectible!) HELLBOY coffee cup, which I still drink from every morning!
I was so enamoured with the character, that I even tried "animating" a HELLBOY rotation! You can view some of my attempts at this, both here and here..
In short, I was once a total HELLBOY nerd!!!

But somewhere along the way, the character's mystique got a little flat & tired for me.. Maybe it's just that I found the stories becoming too familiar. I still enjoy Mignola's artwork.. But lately, he's got so many other artists doing the stories.. And that has zero appeal for me.

Even so, I noticed after going thru some of my own older artwork.. That I've drawn Mignola's character a remarkable number of times! Some were done to just satisfy my own curiousity. Others, were commissioned work, done at conventions, etc..
Here's one from 2004, that I did for a guy named "Otto" from Warren, Michigan.. I think I may have met him thru Jonell Napper's dandy HELLBOY messageboard.. 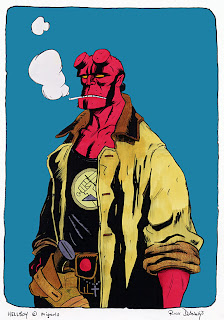 And here's another (more elaborate) HELLBOY image, from around the same period. Maybe, a bit later? This illustration was done as an eBay Charity Auction item, that was won by a guy named "Poom" from Chicago..
The Auction was designed to help raise $ to help cover the medical costs for Rick Cortes, who had suffered a stroke, at that time.. He & I, both helped Jonell Napper early on, when she was putting together her 'www.hellboy.com' website.. 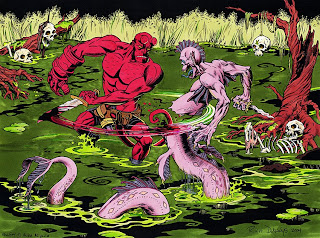 Rick Cortes, is also the main guy at 'The Drawing Board' messageboard, that invited me to become a fellow Moderator.. He's got a HELLBOY 'original art' collection that makes my meagre set, look like a mere pittance. But I don't hold that against him..
He's a helluva nice guy. Who not surprisingly, answers to the name of "HellboyOne" as his DB moniker!

I thought we were going to see something
new after all that nerd yakkin!
tho actually that first image from 2004 I
can't recall ever seeing and I think it might be my favourite of your superhero pics.

Another busy night of Googling yourself again, eh? Why don't you come clean & just admit that you're a self-obsessed egomaniac?! ha ha

shouldn't you be worried about doing your own work and not mine? Spending too much time counting and following every view on your blog won't help you buddy!

Hey Rich, nice pics! I've been meaning to email you to say hey. I hear you're over at Elliot now. I landed a gig at Smiley Guy and I see Dave P once a week and I dropped your name to him. Hope everything's great man. Keep up the posting, I've totally fallen off, but I'll try to get some up soon.

Hello Matt! Thanks, for stopping by..

Yeah, I told Pietila I'd gotten the Elliott job, but it actually hasn't fully materialized, as yet. I'm still waiting to hear back from them..
Starting today, I'll be working for John Lei for a few weeks.. A short-term gig, ruffing out Location Designs.

I think I read on your Blog about the SmileyGuy job..
Congrats!
You're on your way, dude!!