I found the following Frazetta artwork, on DocDave Winiewicz's blog, awhile back. Ain't it a beauty? 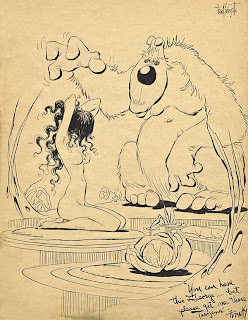 As you can see at the bottom, it's signed from "Franky".. Pretty unusual, for Frazetta.
It's a pen/ink drawing, dated from the mid-1940's. And was intended as a "gift" to fellow artist George Roussos. Who was a comic-book artist in his own right. And later on in the early 60's, he'd garner fame as "George Bell"; one of Jack Kirby's more successful inkers.
During this 1940's period, many young artists were clamoring to find "the good stuff".. Comic-book illustrations by artists of the past, which they could reference (and I mean reference, not "swipe" necessarily!) to help improve their technique/skills, in creating their own artwork.
Usually at the very top of that list, was: Hal Foster.. Especially his work on the 'TARZAN' newspaper comic-strip. Hence the message Frazetta wrote to George at the time: "You can have this George... but please get me those Tarzans!" And eventually, Frazetta did..
You can read the full story behind this, on DocDave's blog.. by clicking here!

Well almost a month ago, I happened to score another Frazetta comic-book gem off eBay.. This time, it was a copy of 'BARNYARD COMICS' #24; published by 'Standard', way back in 1949.. The Seller didn't mention Frazetta content in his listing. But fortunately, I have a number of checklists for this stuff. And I was able to snag this old book which included: TWO complete Fritz stories, PLUS another 2 text illos, as well!
All that, for just over 10 bucks?! Huzzah!!

Rather than selfishly hoard this material for myself, I thought I'd share the 'Hucky Duck' 3-pager with the wider Internet world.. Not only because I was amazed by the similarity of the large Bear pose, to the Roussos "gift" drawing.. But also, because it's one of the few Frazetta "Funny Animal" stories that hasn't been reprinted elsewhere. At least, not to my knowledge.. 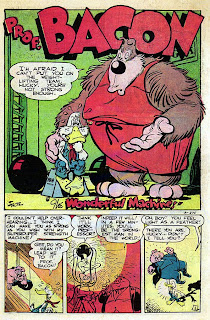 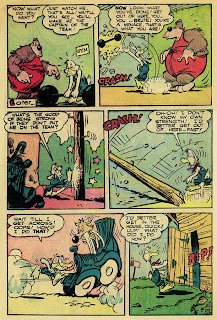 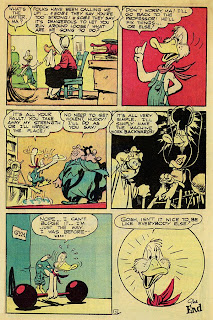 Amazing, isn't it?
The coloring is always so inaccurate & clunky.. But it has a real warmth to it. And I sometimes find that the bleeding of the colors, can actually enhance some of the panel work.. The lighting effects on Page One/Panel Three, work especially well! heh

That top drawing's a beauty , don't think I've seen that one before.

Frazetta = genius.
No matter what he's drawin. Nice to see some funny animal stuff from him. I know he always said it was the hardest stuff for him to draw. Amazin poses as always.

Thanks for posting these Rich!

Hey ran across your site on the Darwin Cooke site.
I have the "Small Wonders" book, but seeing these pages show you how it was supposed to look published. I agree with you about the warmth of the simple color!

Thanks for posting these