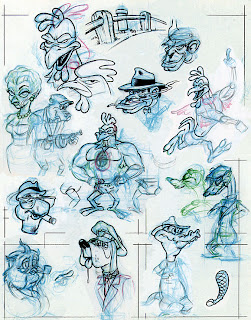 Okay, here's that page of "Funny Animal" development doodles, that I mentioned earlier..
Granted, a lot of it is still quite sketchy.. But I hope it gets the idea across?
The 'Pulp'-style crimefighter here, is obviously supposed to be the Rooster dude..

A lot of this, was inspired by looking at a lot of early Will Eisner & Jack Cole artwork.. I even gave the Police Commissioner owl in the Lower Left, a 'Dolan' -esque hairlick! Most of the other characters on the page, are various ne'er-do-wells of different sizes & shapes.. I think the weird monkey character in the fedora, was riffed off a Jack Cole 'Silver Streak' character..
I looked at a fair share of Milton Stein stuff, too.. But I don't think any of that, really shows itself in these sketches?

Hope you likey.. See y'all laterz!
Posted by Rich Dannys at 9:54 PM

Man, I really like these. Hopefully you're going to do a comic book or other storied format with them (children's book?)

Great sketches Rich. I see a little Tex Avery in there too.

these are cool drawings!

could you tell me what comic that Frank Frazetta surfing story is from?

rajesh - Thanks, man! I do want to use them for something.. But the idea was to make it more of a 40's Noir -type thing. And I dunno if shootin' guns & boozin'-it-up, would be appropriate for the Kiddies? hah

I'd like to retain the "look" of a 40's-era comic or children's book. But without the limitations on the content.

dom - Thanks! You've got a good eye, man.. Yeah, I was lookin' at Tex Avery, too.
Specifically, the model sheet for "Hick Chick".. which I used for the Lana Turner -type gangster's moll.

ryan - Thanks, man.. Been diggin' your Wood and DeCarlo studies, too!

The Frazetta "surfing" story was the 21st installment of Kurtzman/Elder's LITTLE ANNIE FANNY for 'Playboy' magazine.. It was published in July of '65. Frazetta was commissioned to draw/paint all of the bikini girls.. including (of course) "Annie"

Jack Davis (of EC and MAD fame) drew & painted most of the rest..

the crocodiles my favourite
I say do the whole strip about him
and maybe a burlesque dancer chicken.

>>And I dunno if shootin' guns & boozin'-it-up, would be appropriate for the Kiddies? hah<<

Oooh, I love that smoking camel near the top. He looks like such a rogue fellow. Also the alligator near the bottom is pretty nifty too (or is that a crocodile). And am I mistaken or is that a weasel lurking about 2/3rds down the page to the right?