Send For The PATTI WAGGIN! 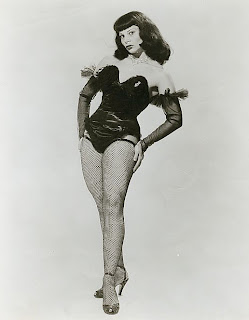 I know it's been a bit of a drought here, re: new posted Artwork.. I hope to remedy that, very soon.. But in the meantime, I'll distract you with another Burlesque Girl entry!
Presenting... Miss PATTI WAGGIN!!

I dunno much about her, frankly.. She performed early on, as: "Patti Brownell".. And also danced as: "Patti the Co-Ed".. aka. "The Girl With The Educated Torso"! haha
She always looked younger than her years.. And I think she had a fresh girl-next-door "look" to her, that reminded patrons of a vibrant, young College Girl?
She was built leaner & more-muscular than the 50's-era norm, for PinUp Girls.. And from what I've read, had something of a Tomboy personality..
She was raised in the mountainous town of Burney, California.. And got her start at the 'New Follies' Theatre, in downtown Los Angeles. She sez her parents taught her to "hunt and fish, like a man.." Whatever that means..
Oh yeah,-- she also liked to race Harley-Davidson motorcycles, on outdoor courses.
She was also married briefly, to 'Chicago White Sox' pitcher: Don Rudolph.. And (I believe) retired to Bakersfield, California; after her Striptease career had ended.. 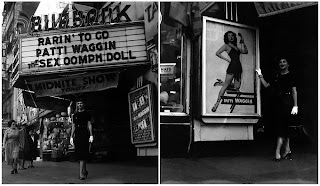 The initial photo at the Top of this posting, was something I'd grabbed off the Web once. But these other 4 photos, I'm lucky enough to own..
Recently, a California eBay Seller was putting up a lot of Patti's personal memorabilia.. Items he'd secured at an Estate Sale, after Patti had passed on. I kept getting outbid on some of the nicer stuff.. So I was thankful to get these!
I was able to get about a dozen small-ish Contact Print photos, that were from her personal scrapbook. Many of these I have not seen before.. But I've seen some of the others, used in her publicity promotion..
These 2 photos were clearly shot outside of an unknown Burbank Theatre.. With Patti showing off both the Marquee and Lobby Poster, for her show..
I spent some time scrubbing these clean of dirt & dust, using Photoshop.. Hope you enjoy looking at 'em! 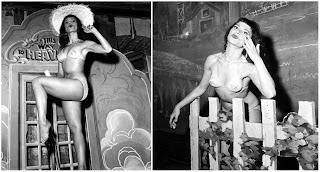 These last 2, are some of my favorites.. She had a kind of Pageboy brunette haircut, that reminds me of "Bettie Page". In a lot of her photos she puckers-up, to give you that "bee-stung" lips effect.. I suppose that was another of her performing trademarks? I dunno..
In fact, if anyone has any information on her.. Please post it & lemme know!
'Til next time.. See ya!!
Posted by Rich Dannys at 10:47 PM

Patricia Hartwig danced as Patti Waggin. In real married life she was aka Patricia Rudolph, married to big league pitcher Don Rudolph. After his career ended, he ended up as an executive with an underground utility company in the LA area.

Rudolph died when the brakes failed on the ramshackle company truck he was driving in Granada Hills, CA. The truck rolled over on top of him on 9/12/68. He was 37.

According to her daughter, Patti was forever devastated by the loss of the love of her life. They had been married for over 10 years. She never remarried.

Sometimes I post these Burlesque pieces to my Blog.. And it gets zero response. I'm always gratified when someone can come by & fill in some of the Story points..

I had read an Article online, about her marriage to Don Rudolph. And also Don's truck accident.. But wasn't aware of the specific details.

I have a few small magazine profiles on Patti.. She was apparently quite a Tomboy, growing up. And also used to be quite a motorcycle enthusiast..

I think she was quite involved with Jennie "Bazoom Girl" Lee's 'Exotic Dancers League', as well!

I am married to Patti's only grandson...patti's only daughter julianna is the mother of my husband.

I had read about Julianna. But didn't know that Patti had grandchildren, too. Great to hear from you!

I'd love to do a comic-book story on Patti Waggin. But don't feel like I have more than a superficial understanding about her life..
If you'd care to fill me in on some of those details, you can e-mail me at: gr8gzoo_at_idirect.com

Remembered she appeared on Main St, downtown L.A., my favorite, also she used a Harley for hill climbing, she is one star that I didn't have an opportunity to photograph.
Though she was great!

Some of the information you have about Patti is erroneous some factual. My company owns the rights to all things Patti Waggin and we are coming out with a book in and around June. I am not at liberty to discuss anything more except to correct any errors if there are some. If you are interested in doing something such as a comic book please discuss this with us first. you can reach me at brillpro@prodigy.net

You must be Farron's wife. Artanya and I have been best friends since 3rd grade, I was there when Farron was born! actually Patti had 2 other grandchildren. One grandaughter two grandsons. I am still in close touch with Patti's daughter Artanya we speak daily. I was considered Patti's second daughter LOL

I have many personal stories about Patti she was the closest thing to a mom I had besides my own I miss her tremendously and reading here just got me nostalgic. Also i have some pertsonal pictures of her in her later years. If anyone would like to know the real wonderful Patti feel free to E mail me at Craigfellows21@Gmail.com

My grandmother Lillian Hunt was Patti's manager/agent for some time. In fact, Grandma named her Patti Waggin - it was that or Patti Cake. I knew Patti well. I sort of resembled her even though I was 15 or sixteen. I was pretty much raised back stage of the New Follies Theater formerly the Burbank Theater. I saw her often at the Follies and visited her after she had her daughter. Of the many girls my grandmother managed, she was really my favorite. She was always so full of pep and had the most wonderful giggle which I tried to copy because it was so darn cute.
My name is Pearl but I go by Pepper.

Pepper, I really need to reach you as I need some information which probably only you can provide. we're working on the second book on patti which involves lots of backstage folks. i have photos but no ID's as well as lots of Lillian Hunt stuff. Would you please email me at brillpro@prodigy.net or you can call at 805-658-1076. I'd like to speak with you asap as i need this stuff to be very accurate. thanx
bob brill
BATWagon LLC

I'm glad you found my blog.. And that you were able to add some detail to my Patti Waggin posting..
Wow!! Your Grandma was Lillian Hunt?! You must have some stories to tell!

Lillian Hunt is one of the giant names in Burlesque/Striptease. And discovered (and gave their start to) many of the biggest stars.. Including performers like Jennie Lee & Tempest Storm!

Was she solely a stage manager at the New Follies Theater? Or did she have a stake in the ownership of the Theatre, as well?

I have an old Men's Mag article detailling the "School For Strippers" that Lillian ran, during the 50's.. It features 3 girls in the photos: Venus The Body (aka. Jean Smyle), a girl named "Thunder".. And of course, Patti too. Or, "Patti the Co-Ed" as she started out..

I plan to keep posting occasionally on my Burlesk obsession. Please feel free to chime in, or e-mail me with any insights you'd like to share..

Thanks for the visit!

Rich can you reach Pepper thru your email accounts recieved and let her know I'd like to talk to her -- actually need to talk to her incase she hasn't been back on the blog. i'd really appreciate it as I'm hoping she'll contact me.
thanx
bob

Actually this is Farron. My wife is asleep right now but I don't think she made that comment since she's met my brother and sister years ago. If anyone is still reading this thing they can contact me on myspace. www.myspace.com/littlefix

is that the stacy who had a blue hair job go smurf?

Hi Farron its me! Yeah your mom and I figured it wasnt your wife we assumed she would have known you had a brother and sister. Your Mom was a little freaked wondering who would have posted that. Im surprised you remember the Smurf Actually you called me Aunt Barney I was purple LOL. I wondered if you would remember me. I was actually there when you were born. Do you remember falling head first into my drained swimming pool? Thats why we used to call you Bumphead!. Ill check out your Myspace and send you my Myspace Addy I have some great pics of your Grandma there.

This is Farron's wife Grace, I do know that along with Farron Patti has two other grandchildren and now several great grandchildren. I hope that she continues to be an inspiration to everyone.

Nice to see your posts. I was there when Farron was born, he was so cute and had a hard head LOL. They actually had to use forcepts when he was born because his head would not conform (There is something you can tease him about)LOL!

I'll be eighty five next week amd i remember Patti as I had a mad crush on her way back when Forty Second Street was loaded with Burlesque theaters. I even brought my wife at the time with me. She loved it..

There was a Burlesque Museum outside of Victorville CA but they moved to Las Vegas. I once asked about Patti and they had very little infomation at that time.

I'm glad I found this site brings back fond memories of NYC,

Thanks for sharing your memories of Patti! In the 1950's, NYC was packed with nightclubs. Many of them were on 52nd street, dubbed "Strip Alley" at the time..

The Burlesque Museum you're thinking of, was called "Exotic World". It was founded by performer Jennie ("The Bazoom Girl") Lee. And after she passed on, was managed by friend/fellow performer: Dixie Evans..
They moved the museum to Las Vegas, to give it a slightly higher profile..

Author Bob Brill recently put together a lovely photo book on Patti.. You should try to find a copy!

Cavalier Magazine did a story on Patti and her husband Don Rudolph in their January 1962 issue. Cavalier is now online and they are going to reprint the full story in January of 2011. It can be found at cavmag.com

I've just installed iStripper, and now I can watch the best virtual strippers on my desktop.