Many moons ago,-- I worked as a Layout Artist on 'The RIPPING FRIENDS' cartoon series.. Overall, the experience was bittersweet. But one of my favorite memories from that show, was working with Spümco art director extraordinaire: Jim Smith; who worked in-house with us for a few short weeks.. Looking over his shoulder, watching him put the "Stinky Butt" episode storyboards together, was a bee-yoot-iful thing!

And if you haven't already heard the Good News: Jim Smith has also joined this here new-fangled Internuts contraption! Lots of terrific artwork to ogle.. And you can learn more about his latest 'CHESTACLESE' animation/comic-book project, by visiting either his Bloggywog or Website 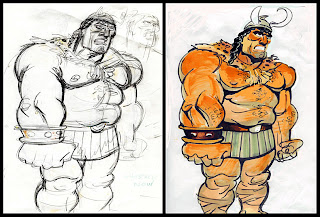 Just recently, I'd helped Jim figger out a few of Blogger's finer Posting details. And he kindly offered to send me a "free" Drawing, as a token of his "Thanks!".. To which I counter-offered: "Hey, send me that Drawing.. And I'll send it back to you Inked!".. Before too long, he'd e-mailed me a 'Chestaclese' rough to work on.. And boy howdy,-- this was gonna be FUN!!

There were a few miscommunications along the way.. Which I blame mainly on trying to talk about Artistic approaches, solely thru e-mail? Sometimes the meaning & subtleties of what you're trying to actually say to someone, can get a bit muddied & skewed..
My initial inking attempts were overly-detailled. And I was beginning to lose the very "guts" of Jim's original sketches. But by my 2nd Pass on it, (I like to think that) I solved most of those shortcomings. 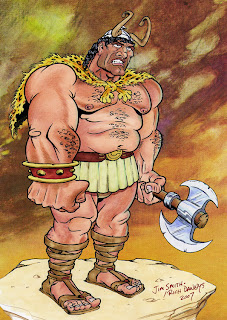 After I finished the inks.. I decided to throw some Color on it, too. It's mostly colored pencils, over a basecoat of light pantone markers. The BG was a definite cheat.. I sampled (what I imagined was) an appropriate/suitable Frazetta painting. Blurring it slightly, to soften the halftone printing dots..
I'll let the Frazetta fanatics, try and guess which painting it was! haha

Thanks for letting me take the old College try on this one, Jim.. I had lotsa fun.. And I hope you're satisfied with the results!
Posted by Rich Dannys at 12:47 AM

nice stuff. I think I like the first pass better with the thicker lines, but both are very nice.

Nicely done. Looks like it was fun to do.

hooohaaaa
you had fun didn't ya!
nice work

Sergio - I love you like a brother, man.. And I approve of your approval!

Rajesh - I should've stated in my Post.. The side-by-side image, features the original Jim Smith artwork.. He e-mailed me the pencil rough. And I believe he'd posted the color rough, on his Blog.. I've kept my 1st Pass hidden from the public! hah

Dom & Draz - Thanks for the kind comments.. It was fun, definitely. Not everyday you get to collaborate with one of your heroes!

Hey Rich nice work on the drawing. I approve of your approval of serge's approval. Show your first pass. Who is to say. There is good stuff in there.

Thanks a lot, Jim.. Let's do it all again, sometime!

>>Show your first pass. Who is to say. There is good stuff in there.<<

Damn Rich, this easily puts all my stick figures to shame.

Just remember not to beat yourself up so much. There are plenty of people eager to do it for you. Because it looks more like your style than another don't mean it sucks. If it don't suck then enjoy it for it's own sake. and always sit up straight and say please..

Let's not do it again ok?