I thought I'd surprise everyone with another April blog post, so soon after my last?.. Just keeping everyone on their toes.. hah  Hope everyone had a great Easter weekend!!

This morning, I made a visit to our local Rexall drug store to pick up a few things.. And (I guess) not surprisingly, I saw that they'd already set up a kiosk discounting all of their unsold Easter candy. My eye was immediately drawn to a "Storybook" package design for a popular brand of "Save-Your-Life" candy rolls.. 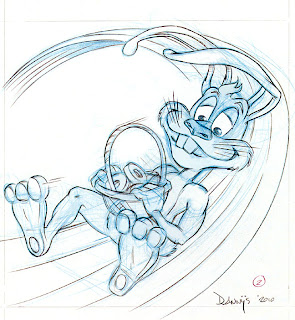 This past Summer, a friend at a marketing/branding studio had asked me to brainstorm a series of action poses for this same Ad campaign, featuring their Easter Bunny character.. Which on-the-surface sounds like a pretty sweet gig. right?.. But as with most Advertising work, the client wanted all of the finished artwork yesterday?!
So, I pulled an all-nighter. And the above sketch, was one of 4 images I was able to finish..

The biggest job frustration for me though, was being forced to work with a previously-created Design for the Bunny.. In reality, there was no bonafide "model".. As it had only ever appeared/existed in one illustration they'd already commissioned. No character style bible. No rotation or turnaround, establishing proportions, etc..
Looking back on what I'd done, I realize now that I'd spent far too much time trying to work out how the rabbit was constructed, instead of solely creating drawings that were appealing to look at.. 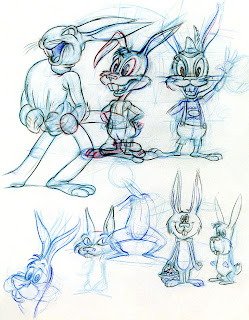 About a week or two later, I hauled out the 4 drawings.. I decided that it might be a learning experience to create my own rabbit character, from scratch.. The above doodle page, was the result.
As usual, I started out by looking at what other artists have done. The rabbit at the Top Left is a bald-faced copy of one that Disney used in their 'Tortoise & Hare' adaptation.. And the rabbit at the Bottom Left, bears a slight nod to the 'Nestlé QUIK' bunny. The tiny one looks like I may have thought MGM's "Droopy" would make a good bunny?! heh
By the time I got to the big-headed shorty in the middle of the page, I feel like I was finally onto something.. Still probably too much "Bugs Bunny" in the face features; but I like the proportions.. I'm guessing that by adding the weird lederhosen outfit, I imagined it would look more unique?

Anyways, all-told,-- it was a fun exercise.. And hopefully, I'll be better prepared to deal with any future jobs of a similar nature, that happen to fall into my lap..

Professional trading signals sent to your cell phone every day.

Start following our trades today & make up to 270% daily.

This is how my associate Wesley Virgin's biography starts in this SHOCKING AND CONTROVERSIAL video.

As a matter of fact, Wesley was in the army-and soon after leaving-he unveiled hidden, "SELF MIND CONTROL" tactics that the government and others used to get whatever they want.

These are the same tactics lots of famous people (especially those who "come out of nothing") and elite business people used to become rich and famous.

You probably know how you utilize only 10% of your brain.

That's because the majority of your brain's power is UNCONSCIOUS.

Perhaps that thought has even occurred INSIDE your own head... as it did in my good friend Wesley Virgin's head 7 years ago, while driving an unregistered, beat-up trash bucket of a vehicle without a license and with $3 in his pocket.

"I'm so fed up with living paycheck to paycheck! When will I finally make it?"

You've been a part of those those questions, ain't it so?

Your success story is waiting to be written. Go and take a leap of faith in YOURSELF.