Well, I've been shamed into a new Blog posting by my good friend: Dave.. He brought to my attention, that an entire couple of months had slipped by since my last post?!.. Thanks, Dave.. That's what friends are for!
Here goes.. 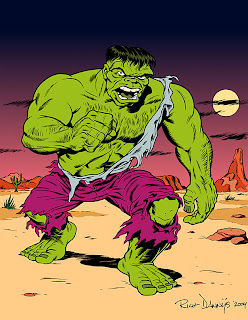 Here's an old drawing of 'The HULK' that I just finished coloring.. My favorite comic-book characters are usually the most iconic characters; and HULK is certainly no exception. He reminds you first, of Frankenstein's Monster. But adds an interesting Jekyll/Hyde dynamic, too; which contrasts the anemic Dr. Bruce Banner against his angrier, green alter-ego..
I contributed this drawing to a Charity Auction at one of the early Paradise Comicon shows. And I found out later that it was won by one of the organizers of that convention: Kevin Boyd. He has the original black-and-white artwork posted in his CAF Gallery, here.

This was an attempt on my part to try and create a version of HULK, in the art stylings of Jack Kirby. The artist that invented the character.. And who (in my opinion) still epitomizes the best take on the character!
I'm fairly happy with the way it turned out. Though I noticed as I was coloring it, that I goofed on the Light Source. The shadows simply don't jibe with the position of the Moonlight.. 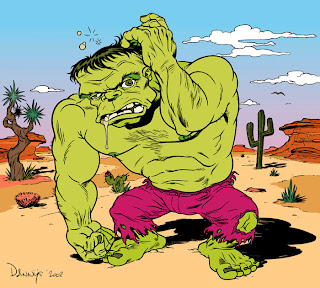 Years earlier, I did a more-cartoony version of the character.. Which I included in the sketchbook that I self-published, in 2003. Different time of day, granted. But very similar.. I've always described this HULK as more of a confused, drunken midget wrestler.. I recall that when I e-mailed this image to Dave Stevens, his immediate response was: "Love the drool.. hah!"
Posted by Rich Dannys at 4:42 PM