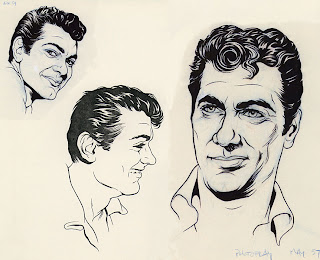 I heard this morning that Tony Curtis passed away, at the age of 85.. I had no idea that he was already that old. He's one of those actors that seemed eternally young..
Many years ago,-- I had the idea of casting Tony Curtis in a 50's-style teen romance comic. I did a few model sheet drawings of him. And even got as far as doing some story breakdowns too, before my interest level completely slipped away.
Anyways, I thought it'd be a good excuse for a blog Post..

Tony Curtis was by no means a favorite actor of mine. But he's a personality that I associate with what might be called the "Golden Age" of Hollywood, I guess? The old-school glamour thang..When he married actress Janet Leigh, it was a pretty big deal. And I guess they became one of Filmdom's power couples, for a short time? Later on, he just got kitschy..
It's easy to dismiss a lot of his acting work. Because of his looks, he got offered a lot of lightweight roles. And appeared in straight-out fluff, like: 'Some Like It Hot' or 'Operation Petticoat'..
As early as '53, he self-produced a biopic on Harry Houdini; which is a guilty pleasure of mine. But he made an equal number of other brave choices as an actor, which also deserve mention.. I think 'The Defiant Ones' is certainly a standout. But the role that I will always associate with him the most, is his stellar performance as "Sidney Falco" in 1957's 'The Sweet Smell Of Success'!
He cleverly uses his trademark good-looks to portray a real manipulative slimeball of a P.R. man, continually sucking up to Burt Lancaster's "J.J. Hunsecker" character. That film is completely brilliant, in every way! 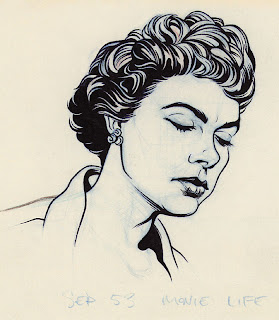 Okay,-- not Tony Curtis, granted.. But when I was unearthing the old artwork files, I also found a drawing I'd done of actress: Terry Moore. She was to be my female lead in that 50's-era romance story I mentioned. So I couldn't resist adding her to this Post, as well..

Sweet Smell of Success is my fave film of his too. A classic performance.

Noel, you've sure got me figgered out.. They were definitely an attempt to mimic Frazetta's beautiful character designs!

I'm being sucked into the vortex of his hair curl!
nice Curtisises....

Ah, but so was Janet Leigh, Drazen!!

Yeah, the inking treatment is admittedly a little overwrought with these.. But they're dated from Art archives from the early 1990's, methinks? Not sure.

Wasn't Tony's real name "Bernie Schwartz" or something? I think I read that somewhere..