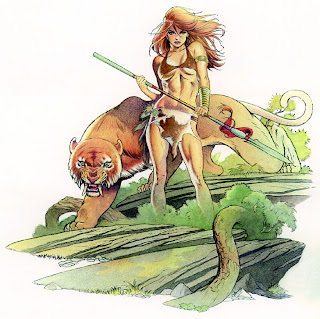 I'd like to take a moment to introduce you to a longtime artist friend of mine: Sandy Plunkett..
Some of you may have noticed his name in the Links section, on my Blog? Though more of you likely, probably have never heard his name before?.. I'm convinced that this is due to change!

Charles "Sandy" Plunkett was born October 18, 1955. He spent his childhood growing up in New York City. And before he'd even finished high school, he had begun drawing comic-book stories professionally!
Here's what the man looks like.. 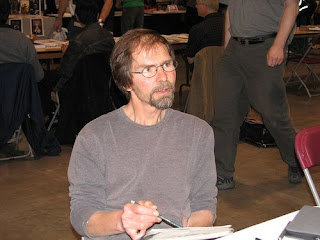 He made his debut in the comic book world in the late 1970s, creating artwork for 'Gold Key Comics'. But eventually, also completed assignments for Marvel and DC Comics, too. Thru the 1980s and 1990s, he did a lot of cover work for Marvel. And even wrote his own stories, for their EPIC Magazine imprint..
Sometime around 1990, Sandy made a move to Athens, Ohio. A small college community, where Sandy earned a solid reputation as "the Town Artist.." Working on all manner of art-related jobs: creating CD covers, wine labels, bicycle touring maps, brochures, political cartoons, business logos, and t-shirts..

Together, we've cultivated a really enriching (weekly) e-mail conversation, that's lasted over a decade. It's not often you get to connect personally with an artist that you've grown up admiring.. So, I consider myself quite lucky! We enjoy talking about everything, of course. But particularly about Art, including our own..
Here's another example of Sandy's artistic prowess.. He gave the 'Original Art' for this t-shirt design to me, after I did him the favour of hosting a number of eBay Auctions on his behalf.. 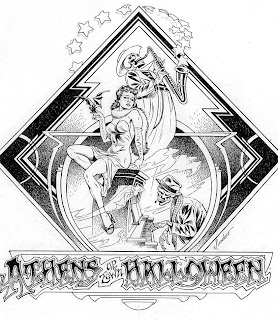 In 2005, I talked local convention organizer: Kevin Boyd, into bringing Sandy up to Toronto as a Guest Artist, for a comic-con. I helped pull together a Poster for the event, using some of Sandy's CONAN artwork. And Sandy even conducted a very successful seminar on "Inking", at the show. I think he was a bit embarrassed, by all of the fawning attention? hah
I'm the guy wearing the goofy grin.. Yikes, bad photo alert! To my immediate Left, is another good artist friend of mine: Dominic Bugatto, who seems to be closely scrutinizing some of the artwork Sandy brought with him.. And I think that's Ruth Tait, behind us? 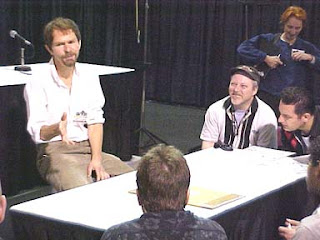 The reason I feel that Sandy may be adding a few more fans, in the near future.. Is that in April of 2010, OHIO UNIVERSITY Press is planning to publish a 224-page book featuring a lot of the artwork from Sandy's own private sketchbooks.. The tentative title for the project, is: 'The World of a Wayward Comic Book Artist - The Private Sketchbooks of S. Plunkett'.. Here's a prelim of what the cover is supposed to look like: 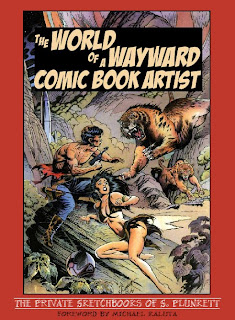 Both a softcover & a limited-edition hardcover release, are planned. The book will feature a 'Foreword' written by one of Sandy's artistic heroes: Michael Wm. Kaluta. And the contents will include almost 400 selected artworks, from sketchbooks that Sandy has kept thru the past 20 years!
The drawings are said to cover a wide range of styles and subject matter; though all are rooted in the visual vernacular of illustration, comic art, and popular art of America. Evincing influences as diverse as Thomas Hart Benton, Frank Frazetta, George Herriman, and R. Crumb.
Images of creatures, both real and imagined, fabulous characters, and dreamlike worlds that are juxtaposed with studies from Plunkett's own life.
The book will also feature an updated interview with COMIC BOOK ARTIST's Tim Barnes, provides fascinating insights into Sandy's artistic process..

Recently this short 6-minute has been posted to 'YouTube' to promote the project:


Keep yer eyeballs peeled for this tremendous book, come the Springtime.. I promise you it'll be worth it!
Posted by Rich Dannys at 3:44 PM

Looks great RIch.
I liked the video clip a lot too.
d
I think you might be swooning in that pic:-)

Yeah, I guess I'm looking a little moon-eyed there.. hah

I remember that con :-) You were def swooning . That might be the back of Noel Tuazon's head to the right too.

Yeah that sit down with Sandy was insightful.His penmanship / inking is a wonder to behold. I'm glad he's getting some long overdue recognition.

Gawd, I know nothing of comic art. Marvellous stuff though, and some nice posts of your own, Rich. Happy new year to you and Sue and families.

Can't wait to see this upon publication!

BlueHost is the best hosting provider with plans for all of your hosting needs.