This is an older Pinup drawing, that I finally got 'round to coloring. I used a similar method to the way that I'd approached my Burby baseball cards. Essentially, colored pencils over top of lightly-toned markers.. In my opinion, this gives an image a slightly warmer, more organic "feel"?
Perhaps ironically, I'm not the biggest fan of pure digital coloring.. Even though I love tweaking my drawings (including the color elements) inside of Photoshop! 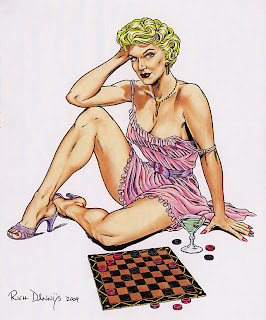 I'm pretty pleased with the results, here.. The only thing that sucks, is that occasionally some of the linework gets corrupted (or worn out), after applying repeated layers of colored pencils. You can lose some of the pure black. Eventually, I'd like to get to the point where I can save the linework as a seperate layer in Photoshop. And work out the coloring on a blueline (or something similar) of the drawing..

The woman (and pose) featured, is based on a composite of different photo reference pics. But mostly, on a nice photo I had of 50's-era actress: Barbara Nichols. She never had much of a career in film, unfortunately.. But you may recall the small role she had in the 1957 noir classic: "Sweet Smell Of Success".. Where she appeared, opposite Tony Curtis and Burt Lancaster.

Thanks for dropping by.. See ya, later!
Posted by Rich Dannys at 9:36 PM

Nice one Rich , I really like it when you color this way. Less forgiving than coloring by computer but it has way more impact & personality.

Yes! Your colouring technique IS astounding!