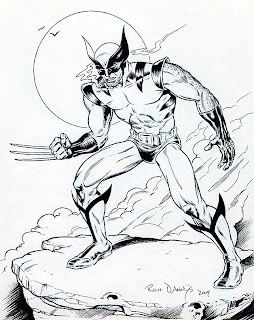 WOLVERINE is easily one of Marvel Comics' most-popular characters. When I was a wee lad, I guess I was quite a fan, too. I can remember drawing him a number of times, when I first got interested in comic-books, etc..
However, tastes change over time.. And ole WOLVIE doesn't really do it for me, anymore. And isn't a character I'd necessarily gravitate towards drawing.

Even so, I'd promised myself that I was going to make an art contribution towards the "Visions Of An Icon" Gallery that accompanies each year's 'Joe Shuster Awards'; annually highlighting excellence in the Canadian comic-book industry.
Last year's theme featured Joe Shuster's SUPERMAN character. But with the recent Hugh Jackman film still fresh in everyone's mind.. I guess the organizers thought that perhaps a down-home Canuck character like WOLVERINE, might generate a few good art pieces, too?
I've gotta admit he is a fun character to draw!

I'm not entirely happy with the way this pic turned out.. I told myself to keep it simple. So I picked a pretty generic pose.. It turned out a little stiffer, than I'd have liked, though. And I got a little too cute, with parts of the inking...
I'll probably do another version, for my actual submission. This one, was up for auction on eBay.. Right now, my own sad state of impoverishment is my current favorite "charity"! haha

Hope you enjoy the Posting, just the same.. See ya!
Posted by Rich Dannys at 2:56 PM

I actually wanna do a more Frazetta-esque pose.. And maybe without some of the costume details.

This one was just done on simple Bond paper. The one I wanna do for the Charity, will likely be on a larger piece of quality Bristol Board..