Season's Greetings, everyone!
Here is the 2008 version of my annual family Holiday Card.. 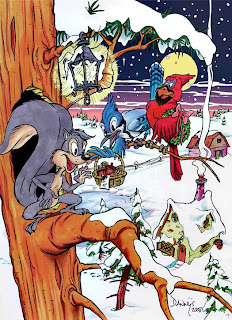 This year, the Design was inspired by my cadre of l'il backyard critter "friends".. Done up in a very Frazetta-influenced "Funny Animal" style! The squirrel is pretty traditional-looking. But I was quite pleased at how the Blue Jay & Cardinal turned out.. I think it has to do with the more-realistic take on their coloring. Which I was able to accomplish, with the aid of one of Suzanne's helpful Bird reference books..
Most of the coloring is analog.. All of it hand done; except, for the Night Sky in the deepest part of the Background. Which involved a cascading series of Gradient Fills, applied with Photoshop. I also bought a few new juicy Prismacolor markers, which really helped things out.. Especially, with the large Foreground tree!

Getting this thing printed, was another story.. And, an adventure in itself!
I usually get 'em done at a Kinko's in downtown Toronto, in the wee overnight hours. When it's a lot less busy. And you can rely on the counter help to really focus on what you want done..
But when I dropped by with my burned CD.. I was shocked to find out that they'd turfed the few remaining Mac computers, that they had on-site. They've gone strictly PC. Which meant that my CD just wouldn't open. And hence, they wouldn't be able to print my Image File..
So, back to Scarborough I drove.. To burn a 2nd CD that would open on a PC platform. Back downtown to Kinko's.. Only to find, that the Christmas Card image STILL wouldn't open?! Grrrr....
Anyways, one helpful Kinko's gentleman (named "Bobby") suggested that I simply e-mail the File to them. As either a JPEG or PDF.. So, back to Scarborough, again!
This time, things worked out.. But of course, I still had to travel downtown for a 3rd time to approve the "proof" for the 100+ Cards which I needed. The yellows turned out slightly "green", I thought. But overall, I was pretty happy with the results.. And ecstatic, to finally have the Cards ready for mailing!

Today, is also my 46th Birthday.. And for whatever pathological reason, I always leave creating my Christmas Cards, to the 11th Hour. For me, any Christmas Card done BEFORE my Birthday, is a raving success story. So, if you're on my Card List.. Okay, it may not arrive before the 25th. But at least it'll be postmarked, before then! Which is why I refer often refer to them as "Seasonal Cards".. It covers my ass, if arrives before New Year's Eve!! har har

I hope everyone has a terrific Holiday Season.. Best Wishes to all of you, for 2009!
Posted by Rich Dannys at 3:07 PM

I recently came across your blog and have been reading along. I thought I would leave my first comment. I don't know what to say except that I have enjoyed reading. Nice blog. I will keep visiting this blog very often.

Drop by anytime, Susan.. Just remember to please leave the Spam weblinks behind, next time you post.. Thanks!

Got mine in the mail today :)

Gotta say , I think one's one of my faves.

Much appreciated , have yourself a great B-Day & holiday and perhaps I'll try & swing a bevvie with you Draz soon.

Happy belated birthday! The card turned out great. I hope you have a great holiday.

Happy belated B-Day. I mentioned to my wife that it was your birthday, but I was too busy to ding you.

I was wondering who you would include in your card as your family is in the process of growing. I always look forward to your Xmas card every year. I have every one of them saved in my basement.

Don't forget to look at www.car-insurance-choices.com for the best prices that spammers have to offer.

Happy New Year Sweetie! Congrats on the card....it's one of the best ones ever! Some day you'll have to show them ALL so people can see your years of toil.