It was with genuine shock that I read of Andy Knight's recent passing (due to a fatal cerebral aneurysm), at the age of 46.. My first exposure to this news, came as a result of reading Paul Dutton's thread on the 'Animation Nation' messageboard. Frustrated that I couldn't find anything else about it, online.. I sent a quick e-mail to Amid Amidi at 'CartoonBrew' .. And he's kindly initiated a posting, that'll hopefully act as a kind of makeshift "Memorial" page..

I first heard Andy Knight's name mentioned, when I was working over at George Elliott's earlier studio: 'Pictor Entertainment'.. We'd been subcontracted by Nelvana to do Layout work on "Ned's Newt". Which was based on a terrific Animated Short, that was produced/directed by Andy.. A cartoon that was very simple in it's Design; but beautifully constructed/staged & animated.. Definitely one of the better series that Nelvana was involved with!
When my friend Jens Pindal was later hired at Andy's studio,-- I'd occasionally drop by. And would always be dazzled by the amazing artwork that they had posted in the hallways & walls, showcasing the different Animated Commercials they'd been (or were currently) working on..

In 2000, 'Cambium' chose Andy Knight's studio, to do work on episodes of "The RIPPING FRIENDS" cartoon series, that they were co-producing.. And I was hired on, as one of their Senior Layout artists. Essentially setting up Scenes, for the Posing artists I was paired with..
It was a Production that had a few bumps & bruises, along the way..
Outside of the main Pitch Pack, we had very few Design sheets to work with. And by the time Week 4 rolled along, we were still waiting on Model Sheets/Turnarounds for the 4 main characters.. So, Andy took it upon himself to create his own "Expressions" sheet.. Perhaps, only as an exercise. Or, to satisfy his own curiousity about how they might look like? I can't say.. But here's what the results looked like: 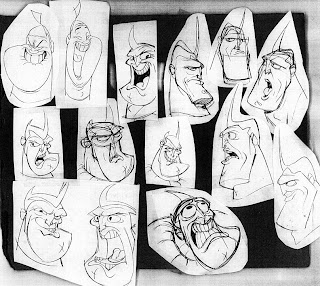 Even though it obviously wasn't Spümco, in it's "style".. I found it really interesting, nonetheless. Sadly, it's the only real example of Andy's artwork that I kept, during my stay at 'Red Rover'. I wish I'd grabbed more stuff out of their trash!
Even so, I think you can see how easily the act of "drawing" came to Andy. I watched him do a few of these.. And it just seemed so effortless to him. With a real economy to the amount of linework he needed to lay down for these!

Though the Production was a "bust" in some ways.. The joy of working at Andy's studio, prevails as a fond memory.. He was a class act, throughout. And a fun guy to be around.. I'll remember the Snooker Table lunches downstairs at 'The Charlotte Room'.. The "Beer Friday" afternoons, that turned his studio into a drunken frathouse.. The 'Bowlerama' Christmas Party, etc.. And especially all of the quality artists/friends that I worked with there, at the time.

I understand that Andy's stroke occurred, while pitching new Animated Projects in France. And that any pain he may have experienced, was (thankfully) short. My sincere condolences go out to his wife Linzi, his 3 children.. And all of the fine folks at the studio, who must now find a way to carry on at 'Red Rover' without him.. Rest in peace, Andy!
Posted by Rich Dannys at 1:32 PM

Andy was one of the few I've known in the biz who could do it all.

Such a talent. Thanks for posting the expression sheets Andy created.

Shoulda been I'd say. Just lovely.

I've been thinking about his family and friends since I heard the sad news on Friday.

Just too sad to think about.

Thanks, guys..
Yeah, it'll be rough times for his studio friends. And particularly, for his wife Linzi & their 3 children!

I've been reading some of the other online Comments.. I didn't know Andy well, by any means.. But from my limited experience, he definitely was the "slyly confident" guy that's been described.
Most artist have a competitive quality, to them. And Andy was no exception.. I think he surrounded himself with great talent, because recognized that it made him better, too.

For whatever reason, I've been remembering all the billiard games we played at lunchtime (and after hours), downstairs at 'The Charlotte Room'..
I could occasionally beat John Morgan. And sometimes Jens, if he'd had too much to drink.. But I don't think I ever won a game from Andy..
The man had some kind of "gift" for Precision.. Whether it was making lines on a page of paper, or across the green felt of a pool table.

He always had that kind of subtle wry grin, that let you know he had the drop on you.. Even if you didn't realize it yet, yourself!

Hey Rich,
Pam Rose here.
I'm too very shocked about the passing of Andy and I too will be 46 in September.
I didnt know Andy at all..I knew he did some work at the Toronto Disney Studio about 10 years ago. I think I said hi to him a few times. I have been reading all the blogs about him in the past few minutes.
Its a sad time in animation.

Moving post Rich and many fond rememberances by those who knew him at work and at play.

MY sincere condolences to you and all of Andy's friends and family.