Another LONG hiatus from the ole Bloggy-wog.. Apologies, once more.
If you've been following Suzanne's blog,-- then you have probably already surmised the reasons for not posting so much.. One big (tiring!) word: "Renovation".
I did manage to find some time to purchase this week's 'JUSTICE LEAGUE: The New Frontier' 2-disc DVD release.. Watched it, and enjoyed listening to Darwyn Cooke's commentary on how he felt the whole "adaptation" thing went over, too.. Suzanne suggested I should definitely "do a Blog post" on it.. But I'm really not sure what to say about it yet. So I thought I'd go in another direction.. 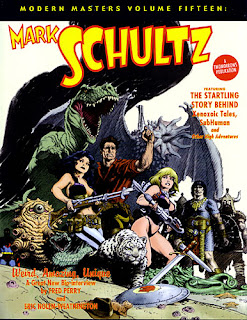 Actually, a LOT of great books have been coming out, lately.. Including last week's beautiful 'Alex Raymond' hardcover.. But I wanted to highlight the most recent Volume (15) in TwoMorrow's MODERN MASTERS series of trade paperbacks, featuring: Mark Schultz. I'm not a huge fan of the way this series chooses to showcase artwork. But the interviews, are generally very well done. And this one, is no exception..
Back in early Nineties, I was out of the Animation business for a brief spell.. Having totally burnt-out on doing their Layout work.. I chose to go on a self-imposed hiatus from Nelvana, where I'd been working.
I can't remember what I was doing instead, now.. Probably a bit of comic-book retail work at either 'Dragon Lady' or 'The Beguiling'..
But when I heard thru the Grapevine that Mark Schultz' 'XENOZOIC TALES' comic-book had been optioned as an Action/Adventure cartoon thru Nelvana.. I got my Portfolio back together & made a trip down to the studio, to see if I could possibly get some work as a Designer on it.. 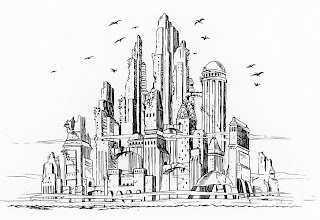 Luckily, Ted Bastien thought I'd work out okay.. And for my first-ever "Design", Ted assigned me the (daunting!) task of drawing up an Establishing Shot, featuring the cartoon's Main Location: "The City In The Sea".. A kind of crumbling cityscape that'd been retro-fitted with hydraulic tubing/cables & stone bridges.. Slightly over-run with fast-growing vines/prehistoric plants.. And with Pterodactyls, nesting in the upper echelons, etc.
Not having ever "designed" anything for Animation before.. I simply followed the models/templates, already established in Schultz' comic-book.. There were literally TONs of Location Designs that needed to be completed. Here's another example, of a Reverse View:

It was a pleasant surprise to see that Mark Schultz was quite involved firsthand, with the cartoon's production.. He had partnered up with 'Galaxy Films', to ensure that as much of his comic-book's appeal, would translate into the cartoon episodes.. Understandably, he had final-say on all 'Character Design' details.. And would occasionally send along Notes, that he felt would be helpful or interesting to us..
Here's a series of Sketches he fax'd us, featuring a character named: "Lashard".. I think we'd originally Designed him with some kind of metal skull-plate, 'cuz he'd had some kind of horrible disfiguring accident? And Mark Schultz wanted something a little more natural & subtle-looking, that still retained his hawk-ish appearance.. 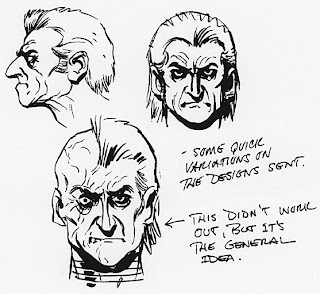 Here's another unpublished Pic he faxed us, that doesn't appear in the MODERN MASTERS book.. I guess he imagined ALL Canucks were Hockey-obsessed? I'm a Baseball man, myself! 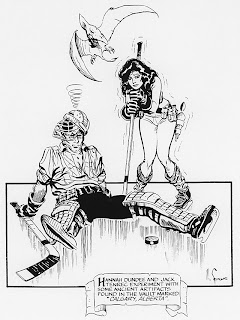 Schultz actually came thru the Design studio, about mid-production.. I can't recall the exact date. But I remember that he brought writer Marv Wolfman, with him. As Wolfman was responsible for some of the Episode scripts, I think..
The brief meeting we had with him, was pretty anti-climactic.. He was congenial & polite. But the Nelvana producers couldn't wisk him thru our workspace, quickly enough.. Heaven forbid, an Artist should take time to talk to other Artists?!!
They were probably fearful that we'd soon get around to complaining about Budgets & Schedules, like we always do?.. hah

Ted Bastien knew that I was a big fan of Mark's work. And he used to tease me incessantly about how "my Hero was coming!".. Oh, brother! After he finally showed up,-- I found this devastating cartoon hanging over my Drawing Table: 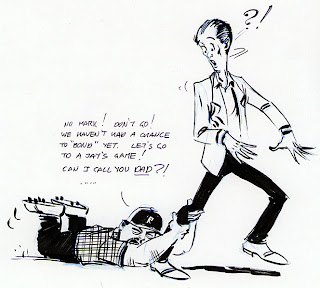 Ted was good about trying to feature all of the members of our Design crew, into some of the episodes themselves.. I think Ted drew himself, as a Truck Driver. I remember that Kurt Lehner was a kid hanging off the back of an old Fire Engine. And for whatever reason,-- Ted thought that I'd make a perfect generic "MoleMan".. Featured in an episode where a Mining crew had to excavate below the foundation of "The City In The Sea".. 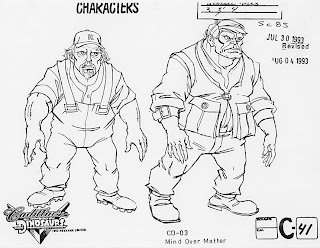 As you can see,-- Ted's got me in what he called my Rich Dannys "uniform".. Baseball turf shoes & my traditional "soup hat" with the letter 'R' on it! haha The other big bruiser almost looks like it was supposed to be fellow Designer: Leif Norheim.. But I don't think so.

The "Cadillacs & Dinosaurs" cartoon, was a memorable Job for me.. A fun project. And essentially, Nelvana's first real attempt at a genuine Action/Adventure cartoon. I think it worked out well, for a variety of reasons.. Not the least of which, was working with a realistic Budget & Schedule..
A year later, most of us began working on Nelvana's "Jim Lee's WildC.A.T.S." series.. Cranking out an equal number of episodes. But, on half of the same production schedule. I think it fared badly, as a result.. Oh, well.

Another great post, Rich. Love your drawing on all that old stuff. Seems like yesterday though. Cheers for the link and look forward to your next installments. Hmmm...I wonder what Lief Norhiem is up to? I painted a lot of his wonderful locations over the years.

Thanks for the gracious comments, Clive!
Yeah, very hard to believe that it was THAT long ago, eh?! Time, marches on..
The last time I ran into Leif at Nelvana.. He was dropping off Design sheets for 'George Shrinks', I think? That was quite some time ago, too!
I'm not ashamed to say that I used to occasionally "steal" some of Leif's sketch/drawing discards, during the "Cads & Dinos" run.. His stuff was SO good!!
I've seen some of your finished BG paint treatments over Leif's stuff, on your Blog.. You do gorgeous work, Clive!!

Now if only they'd do Modern Masters on M. Kaluta .

Thanks, Dom!
Yeah, I guess Kaluta is overdue for a MODERN MASTERS profile.. Or, did he have one already? I haven't kept track.

I DID see a "new" 'Art Of Kaluta' book in the latest PREVIEWS Catalog, tho.. It's by the same publishers that did the nice Brian Bolland hardcover, awhile back..

I don't know how you talked Suzanne into move into your subterranean lair moleman but well done. Schultz looks kind of like John Waters.
I thought the big Kaluta art of book was out?I recall flipping through it.

Draz --
I hyp-mo-tized her with my Deep Earth voodoo-hoodoo!
The Kaluta book will be published by 'Desperado'.. They recently did the P.Craig Russell book, too.. which I didn't buy.
If it's in the current PREVIEWS.. it likely won't be out, for about another 3 months. But I've got so damn many Kaluta 'Art' books, I dunno if I'll pick it up.

Loved their Bolland book, tho!