Yeah, I'm still here.. Though I'll forgive those of you, that figured I must've flown the Chicken Coop! WOW,-- I didn't really want to believe that my last Blog Post, was more than a month ago.. But I guess it's True?!
Truth is,-- I've been exceedingly busy with Work, lately.. And that's left me with virtually ZERO time, to update things on here.

I'm still freelancing for the "Two Presidents" animation studio. Working as a BG Layout/Location Design guy, for their "Will & Dewitt" children's cartoon series.. From what I'm told, the show has already aired here in Canada. And if it hasn't already,-- it'll be airing on the WB Network pretty (I'd imagine) soon, in the U.S.A. 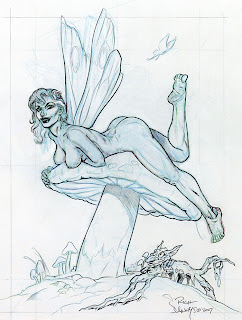 So what to Post?
Well, I've got about a half-dozen Pics that're in various stages of completion.. The idea was, that as I got them finished, I'd post them up.. But I just haven't found time, to give them the attention they deserve.. So, I thought I'd just post one of the better ones, as another WIP..
That's fancy Artist Talk for "Work In Progress".. Which really means: "Please excuse this half-assed rough drawing that I didn't honestly have the time or inclination (or bravura) to complete.."

I've been calling this Pic: "Mushroom Girl".. I'm not a Fantasy Art nerd, per se. But I suppose she's a kind of Forest Nymph -type girl. Influenced (obviously) by the kind of work Frazetta does, from time-to-time. Maybe like his "Pillow Book" artwork, if you're familiar with that stuff? Hopefully, there's a bit of a Dave Stevens feel to it, too.. As that too, was my intent..

I tried to clean it up as best I could, using Photoshop.. But it still looks a little rough, in spots. There's a bit of inking done on it. But you can see where I've left myself some Revision notes, too. Overall though, I'm happy with the way it turned out..

Hope to have something more substantial posted again, soon.. Thanks, for all of your kind patronage & patience!
Posted by Rich Dannys at 2:08 AM

Aw! You gave her a bum like mine...when I was in better shape.
I didn't notice the little goblin guy before....he's a cute touch!

Nice pic Rich. I always loved Frazetta, even when he was doin' the cutesy stuff. Good to see you're still postin. Hey we all get busy. I gotta buddy over at 2Prez in the design dept, Ryan. Anyway, keep em'comin'.

Amazing drawing, Rich. I always look forward to reading a new blog posting by you because it comes with another piece that is guaranteed to blow me away. I agree with the first person to comment, the goblin is a cute touch.

Sweet SoozyPie --
Oh, you know your beautiful bum will always be like Magnetic North to me!

Matt --
Thanks, man..
Yeah, Frazetta can do no wrong, from my point-of-view.. Lotta great books on his stuff, coming out lately!
I don't have a lot of contact with the Designers at 2Prez, outside of Andrew Hickson.. Is Ryan a part of that "6 Aces" crew? And is he on "Will & Dewitt", too?

Milo --
Thanks, dude..
Went to your 'Digital Kontent' site, and very much enjoyed the podcast interview with Kevin Boyd. I was secretly hoping he'd dish a bit of dirt on his migration to Hobbystar.. But was also kinda relieved when he chose to take the High Ground, and simply avoid any muckraking, etc! heh

Ryan's on Will & Dewitt, working with Doug Macklen in design. He might be boarding on it too. Hell of a fella, got me an interview, but I didn't get the gig.

That's a shame you didn't get the gig, Matt.. Don't let it get you down. Or, become complacent.. Just keep strengthening your Portfolio & continually applying to other studios.. I'm sure it'll just be a matter of time, before you find something!

Tried sending your Resumé to 'Story City' studio? My gf (Suzanne) works there now. And it seems like they're always looking for new Storyboard Revision people, etc.. Might be worth a look? LMK, if you need me as a Reference..

Dunno Ryan or Doug Macklen.. Like I say, I have very little contact with anyone in-house, outside of the guys I've mentioned.. And my Layout Supervisor/Coordinator: Dave Pietila.. A good friend that I've worked with many times, over the years..

I thought it looked like Serges ass ..oh well
that goblin must have a thing for the underside of mushrooms!
nice rich,
time to lay some watercolour down now (or pencil crayon)

Nice one Rich, a pleasent surprise to see some new work ;)

Draz -- Serge doesn't like to talk about.. But his ass is a little bonier, than the one depicted here!
I've got a higher-rez version of this, on my HD.. I wanna clean it up, a bit more. And then yeah, I'm hoping to dish a bit of color on it!

Dom -- Thanks, man.. Yeah, I'm being kept super-busy by the '2 Presidents' gig currently. So it's been difficult finding Time to create any "new" personal work..
No one's more conscious of that, than I am.. But dude, I'm TRYIN'!! heh